THE impacts of COVID-19, supply-chain challenges and the Ukraine-Russia War are benefiting markets for Australian oilseeds, according to PB Agrifood director Peter Brodie.

Talking at the PB Agrifood Soybean Trial and Field Day held at Kingsthorpe this week, Mr Brodie said he has never seen the agriculture market as good as it is now.

“I don’t think we have ever had, in my time, a situation where so many markets are so good,” Mr Brodie said.

“The only one that isn’t so good, which we buy, is chickpeas, but that’s probably mainly because container companies are not keen on sending their containers to the Indian sub-continent.

“That’s the main market and that’s why chickpeas are a problem.

“Companies can find that they can send them empty back to China, fill them up with whitegoods and bring them back and make a lot more money doing that.”

He said current soybean futures prices, sitting at about US$16 per bushel, made Australia competitive in the global market.

“We need the futures to be up $12 a bushel or more normally to compete with the world price exports.

“It was only last week that we were able to win a tender into Korea, and we haven’t won that for about eight to 10 years.”

He said global market changes has created new opportunities for products such as soy-based fish foods and organic chicken meals.

“The market worldwide has changed in the last 12 months.

“Generally, when we are making soymeal we have to compete against imported meal from South America and America.

“There is something like 600,000 tonnes of soymeal being imported in.

“At the moment, the way world prices are, imported soymeal is very high.

“It has given us a pretty good opportunity to sell soymeal where we don’t always have the opportunity.”

He said the organic chicken-feed market was one example of an opportunity that has arisen from the uncertain relationship between China and Australia.

“Some of the poultry people, especially if they are making organic eggs, have to rely on the organic meal out of China.

“Now that is too big of a risk, so they are buying meal from us.”

Mr Brodie said the Ukraine War and COVID-19 had made local industries realise more manufacturing needed to be undertaken in Australia.

He said sunflower oil was a key example of this market shift.

“With the Ukraine War, and with something like 60 per cent of sun oil in the world coming out of the Black Sea, many of the food companies use sunflower oil, and we are now for the first time in many years getting inquiries if we would crush sunflowers.

“People are also asking us if we would contract sunflowers, and we are saying that if they pay the right price, then the farmer will want to grow it.”

Mr Brodie said the current market for premium human-consumption soybeans was favouring higher protein types, such as, the Hayman variety.

He said Hayman was one of the most popular varieties, especially with customers manufacturing tofu products.

PB Agrifood’s Ian Morgan said Hayman offered a lot of benefits for growers and buyers, but he recommended people plant the variety that suits their farm.

“For my money, on the Downs it looks great, the quality of the seed is terrific,” Mr Morgan said.

“It’s a very good variety and we are excited to see where it’s going to go.

“But, the best varieties are the ones that work best on [a] farm, and we will find a market for it.”

CSIRO research scientist and soybean breeder Andrew James said Hayman had a lot of advantages for growers, because of its longer duration, durability and popularity with higher-value human-consumption markets.

“It also has the protein that is the type that gels more firmly. 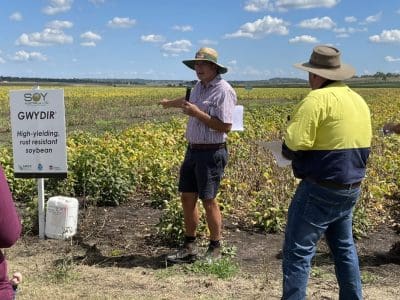 “Now that the tofu manufacturers in particular have seen Hayman, that is pretty much all they will buy.

“You get the tofu results back from them when they do their trials, and it easily makes like 50pc more tofu out of the same quantity of beans than some of the other varieties.

“The beauty of firm gelling is that it holds a lot of water, and water is essentially free, so you get a lot more yield for the same amount of beans.”

He said the CSIRO-backed v2foods was one Australian company showing “strong interest” in Hayman.

“v2foods are planning to put in a big processing plant that could use up to 200,000t a year of soybeans to make plant-based mince.

“They have already got a burger through Hungry Jacks, and they are busy marketing the plant-based mince through the supermarkets.

“They have emerging markets throughout Asian.”

Dr James said developments with v2foods and the wider industry in Australia could significantly increase the market for growers, and push scientists to develop more high-protein varieties.

“Where we go with the future of soybean breeding is all up in the air.

“There is no telling what will happen, but hopefully if v2foods goes ahead, it will underpin the market quite substantially, because they are talking about paying enough for the beans to acquire that 150,000-200,000t.”

Australia’s forecast soybean production was 53,800t in 2021-22, according to ABARES latest crop report.

Over half was produced in New South Wales, with Queensland the second-biggest soybean-growing region.