WATER from melting permafrost has entered the Svalbard seed vault – the facility in the Arctic that holds the world’s largest and most diverse seed collection – but there has been no damage to seeds, including the 11,000 Australian seed packets stored there. 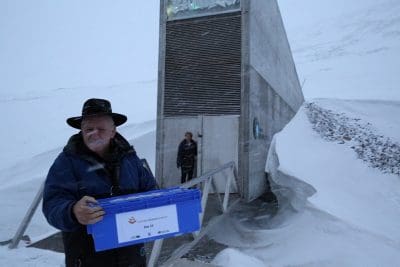 Tim Fischer on an earlier visit to the Svalbard seed vault.

Former Deputy Prime Minister and chair of the Crawford Fund, Tim Fischer – who is vice chair of the Crop Trust, the organisation that supports the storage facility – said he had been fully updated on the situation at Svalbard in Norway.

“This is by no means an emergency – there has been zero damage to any seed packets in the massive Global Seed Vault buried in an ice mountain at Svalbard, four hours flying north of Oslo,” he said.

“When water intrudes into the outer part of the seed vault, as it does from time to time, it is immediately removed again by pumps that work around the clock.”

Mr Fischer knows the vault well, having visited it in the past, seeing the deposit of Australian seeds to the collection.

“The vault has several backup systems and internal doors, remedial work near the entry portal has been carried out after record warm winter temperatures caused a melt in the area permafrost,” he said.

The vault is owned and administered for the Crop Trust by the Norwegian Government.

A statement from the Crop Trust said the seeds in the vault had never been threatened and would remain safe, with additional planned measures underway to provide additional security, based on the ‘better safe than sorry’ approach.

It said the measures would provide the most optimal maintenance and surveillance of the installation.

Mr Fischer said the seed vault and Crop Trust were non-commercial ‘for public good’ operations with many programs in addition to the vault, including collecting ‘crop wild relatives’ like wild rice and grass peas to improve varieties to combat climate change.

“With global warming, the Svalbard Global Seed Vault has the golden grain keys to the future of world agriculture,” Mr Fischer said.