It is perhaps no great surprise that the winner of the 2017 Sydney Royal Show grain young  judges competition is eyeing a future career in agronomy.

But whether he follows that specific path or not, Chris Bowler of Holbrook, NSW, is sure about of one thing: he wants to keep working in agriculture. 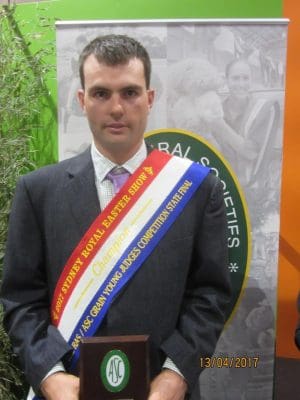 The Royal Agricultural Society of NSW’s  grain young judges competition tests the skills of 15-25 year olds who have progressed through to the State final from their own local and regional shows.

Armed with some information about the analysis, or test results, of samples, competitors have eight minutes to judge four samples each of three different grains – this year it was canola, barley, and wheat – and then a further two minutes to provide an oral presentation of their reasoning to judges.

They are encouraged to rank grain on a range of points including quality, or suitability of the product for its intended end use, to ensure the grain not only looks good, but has the kind of traits which indicate commercial viability.

For example, wheat intended for bread making, is required to be “vitreous, plump, non-mottled and free from sprouting or other weather damage, while the best stock feed will be starchy”.

Mr Bowler’s oral presentation, through his mature ability to communicate his knowledge of grain, helped to deliver him first place in the NSW RAS/ASC grain young judges state final.

“In each of the three grain varieties you have four samples.  The top sample will be a stand-out.  The middle two would be close together, maybe one having harvest trash; the bottom sample will have something wrong with it, such as disease or be mixed with different seeds,” Mr Bowler said.

“They are exactly what you get in a header box sample.”

Mr Bowler said he had picked up skills “along the way” to recognise protein types in grain, and different diseases such as black spot.

Mr Bowler grew up on a farm at Holbrook, and the town’s show is his local event.

His journey this year to the Sydney Royal followed the group finals early in February, where 28 young-grain-judge qualifiers from around NSW were selected.

To prove he has an eye for not just grain, Mr Bowler also won a place in the RAS merino fleece young judges competition.

Mr Bowler returned to the Holbrook district having worked in South Australia, Western Australia and Queensland for a number of years, gaining his Certificate IV in agriculture (beef cattle) while in WA.  He is presently working full time and is keen to commence further study.