TIGHT NEAR-TERM availability of urea in many south-eastern Australian growing areas is the latest side-effect of last year’s drought, which has realigned the supply chain to shift what little grain was produced to up-country markets instead of export terminals. 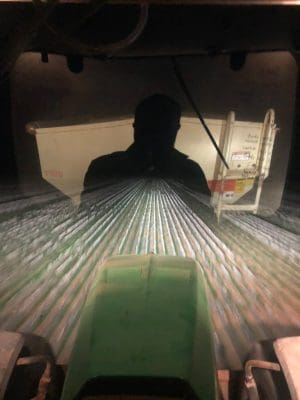 It has cut the artery connecting farm and port which in normal years has delivered urea as the backload on grain deliveries, and enabled the fertiliser to be stored on-farm in readiness for the growing season.

Short local supplies also reflect a lack of grower and reseller confidence in making an early investment in the nitrogen fertiliser which can be applied pre-plant or used to top-dress established crops.

Recent widespread rain across southern Australia has prompted a flurry of urea-spreading activity from southern New South Wales around to the Geraldton zone of Western Australia, and has emptied most available off-farm reseller and grower storages.

However, the shortage is expected to be short-lived, and have minimal effect on yield potential.

“They’re having to wait for the next shipment, but it’s still early enough in the season for it not to be a problem.”

Mr Redden said some farmers were using alternatives like sulphate of ammonia or urea and ammonium nitrate (UAN) to tide them over until they could source urea.

Delta Agribusiness Young-based fertiliser business manager Tom Wills said the disruption to the supply chain had made it difficult for some growers to fit urea delivery into schedules and budgets.

“There are a lot of people who were five days out from rain and were trying to get hold of it.

“We’ve been trying to encourage people to say ‘yes’ instead of ‘no’ when they get the chance to get a load of urea because it’s better to be holding it than chasing it.”

“This year’s been a bit different because most of the grain has been transported to different locations.”

“The ships bringing fertiliser are still coming in, but any stocks they are delivering are being taken up quickly.”

Wagga Wagga-based NSW Department of Primary Industries’ research and development agronomist, dryland Rohan Brill said any scrambling for urea had more to do with grower strategy than an industry supply problem.

“That means people are wanting more urea than they expected.”

Mr Brill said yields responded more to higher rates of urea and not so much the timing of applications, so any delay in spreading of urea at this stage was not likely to limit yield potential.

However, Mr Brill said buying urea ahead of when it was needed was a prudent investment.

“The cost of urea spread at 70 kilograms per hectare makes it cheaper than a pre-emergent herbicide.”

“Boats are arriving, and farmers are getting to the port as quickly as they can to pick it up.”

“We have seen a delay in urea deliveries, but it’s been days more than weeks.”

The free-on-truck price at port for urea in recent months has hovered around $500 per tonne, and sources have said resellers as well as growers were hoping for a prolonged and significant price drop on which to buy urea.

Apart from a dip in around April to $480/t, this has not happened.

Maher Transport principal Brendan Maher said some growers have inquired about getting loads of urea from port, but have been put off by flat rates which were generally 20-30 per cent higher than backload rates available when grain was delivered to port.

“A lot of farmers have just gone and got their own urea, because more and more of them have their own trucks these days.”

“A lot of people were hoping for a cheap rate for a backload, but they haven’t had the grain to backload it with.”

Sources have said canola, traditionally the first winter crop after oats to be planted, and also barley, have been the main recipients of urea spread ahead of July rain.