ETHANOL production at Dalby Bio-Refinery Limited (DBRL) on Queensland’s Darling Downs has been cut in recent weeks in response to prevailing high grain prices and variable demand for the petroleum additive. 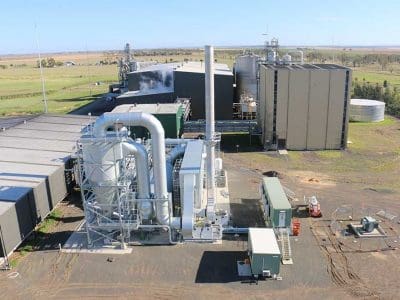 At full capacity, the annual sorghum usage at DBRL is around 200,000 tonnes per annum, but this will not be achieved in the current year due to the production cut.

DBRL trading and logistics manager Brett Carsberg said the plant in recent months had been operating at 70-80 per cent capacity, and while fluctuating week to week depending on profitability, production had been reduced below capacity since May.

“I expect that situation will remain unchanged through to next year.”

However, Mr Carsberg said production could increase if new-crop pressure were to reduce grain prices when harvest of Australia’s winter grains gathered pace.

“It is possible that cheaper grain in September or October could lead to demand increasing again.”

DBRL opened in 2008, and is inland Queensland’s major industrial user of grain.

It has been its major buyer of Sorghum 2 grade, which accounted for a big chunk of the Darling Downs crop harvested earlier this year.

Sorghum 2 grade allows for a higher percentage of small grains or screenings, a symptom of the extremely hot and dry growing season.

“We were receiving Sorghum 2 which gave growers an outlet.”

The CQ sorghum harvest is more than halfway through, but with end-users in CQ and North Queensland now covered in the near-term, the market has softened and growers are largely unwilling to sell at reduced prices.

Therefore, CQ sorghum has not been pricing into the DBRL equation.

The plant at full production consumed about 4000t of grain per week, with sorghum and barley its preferred feedstock, and is owned by United Petroleum.

Its website says DBRL can produce up to 76 million litres of ethanol per annum to blend at one part in 10 with unleaded petrol for use by Australian motorists.

DDGS in particular is a sought-after ingredient in beef feedlot rations.

Australia’s biggest producer of ethanol made from grain is Manildra Group.

Its plant at Bomaderry south of Port Kembla in New South Wales has been using Canadian grain in recent weeks.

Manildra Group was contacted and declined to make a comment on the current terms of trade in ethanol production.