WHILE United States farmers are “nervous” about some of the issues facing them under the Donald Trump administration, there is strong support across rural America for the new president and many of his agricultural policies, according to Agri-Pulse founder and editor, Sara Wyant. 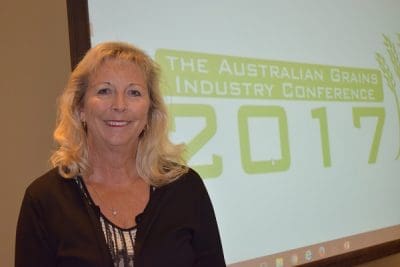 Speaking at the Australian Grains Industry Conference in Melbourne, the veteran US reporter of US farm, food and rural policy said while many people were very negative about the new president, there were a lot, particularly in the farming areas, who really liked and supported him.

“There is a high degree of polarisation. But you have to look at the fact that he has done a lot to respond to what farmers and ranchers have been saying,” she said.

Ms Wyant said farmers and ranchers were a key part of Mr Trump’s electoral success because it was largely the rural counties which came out in support of him. 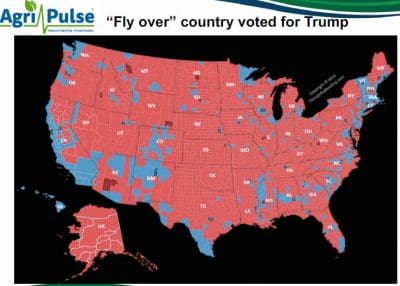 Counties, marked in red, that voted for Donald Trump, showing the strength of his support in rural America.

“They wanted someone different, someone who would stand up and listen to their concerns about economic development and the need for jobs and prosperity in rural areas. It is not just farmers, it is the foresters, coal miners and people who work in natural resources,” she said.

“They appreciated the president’s commitment to reduce regulation and his public support of National Agriculture Day and the farm sector, and we’ve also seen the formation of a Taskforce on Rural Prosperity which is due to report back in October.

Ms Wyant said she had conducted nationwide research of 750 farmers, both during the primaries and right before the election, which indicated there was a lot of support for Mr Trump. 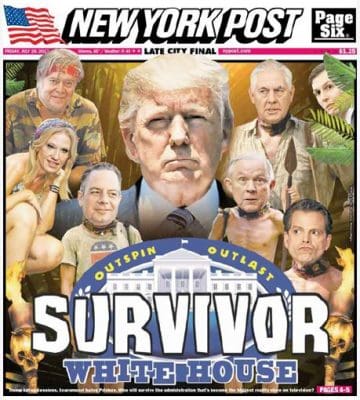 Despite a chaotic first six months in office, as depicted in this image in the New York Post, support for Donald Trump remains strong in rural areas.

And she expects another survey currently underway will show there is still strong support in the rural sector.

But Ms Wyant said while the president was elected on the promise of making significant changes to trade policy, it was one of the few areas of policy where many farming bodies disagreed with his approach.

“Trump was very much about ‘America First’ and getting rid of the Trans Pacific Partnership (TPP). Both Republican and Democratic candidates campaigned on this, which is against what a lot of America’s farmers and ranchers wanted,” she said.

“National farmer organisations, with the exception of the National Farmers Union, were very supportive of the Trans Pacific Partnership (which the US has now withdrawn from).

“And they know there were some issues with the North American Free Trade Agreement (NAFTA) (a trilateral trade block agreement between Canada, Mexico and the US) but largely they understand that Mexico and Canada are some of our largest trading partners and the TPP would have fixed some of the issues that American farmers had with NAFTA.”

The talks officially start on August 16, but there have already been several hearings and farm organisations have been testifying.

“Their primary message is: “Do no harm. Let us continue to have access to these great customers in Mexico and Canada, but drop some of the additional barriers that are on things like dairy and poultry that could have been fixed in TPP, but that is no longer an option”.”

Ms Wyant said of all Mr Trump’s policy positions, the one he was most specific about was his support for the renewable fuels standard.

“That was somewhat unusual because he has a lot of people in his cabinet who are from oil industry states,” she said.

“It is one of the things that will continue under this administration. Maybe it won’t be enlarged, but it won’t go away.”

Ms Wyant said Australian farm businesses were facing similar obstacles and challenges to their US counterparts, and urged them to be prepared to make the most of their opportunities.