UK agricultural consultant Keith Norman says yields in the UK have the potential to be lifted to at least 10t/ha.

WHILE Australia’s dry-climate wheat crop rarely averages more than 2.0 tonnes/hectare, farmers in the United Kingdom are finding it hard to turn a profit on a national crop that averages 8.5t/ha.

Speaking at Grains Research and Development Corporation Updates in Australia, UK agricultural consultant Keith Norman said yields in the UK had plateaued and a concerted effort was needed to lift production to its potential of at least 10t/ha.

“The UK wheat average is 8.5t/ha. We are not happy with that. 8.5t/ha doesn’t pay the bills. We are in a very high priced, high cost production system. The price of fungicide, seed, fertiliser, land rental is high – at 8.5t/ha you are really just breaking even,” he said.

“We have to get better yields to start bringing profit back into the business. 10t/ha would be the aspiration of most growers.” 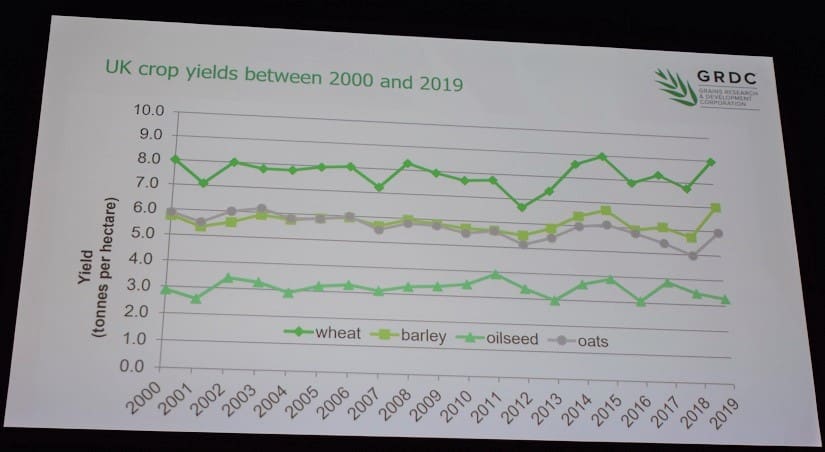 Mr Norman said it was becoming a lot more difficult to get the best out of crops in the UK.

“If we look at where yields are heading in the UK, there is what we call the ‘yield plateau’. The trajectory is not in an upward direction anything like it should be,” he said.

Mr Norman said the UK needed to find ways to fill that gap.

“We know, for example, that wheat in the UK needs a green area index (GAI) of about 6 to achieve maximum yield. It needs to be kept disease free and have a plant population so that all the leaves are exposed to the sunlight,” he said.

“If we do that we know we get 1.2t/ha of biomass for every terajoule of energy that falls on the UK.

“We know there is a close correlation between biomass and yield. In the UK (but not necessarily in Australia), the more biomass we produce the more yield we get. Our harvest index is fixed at around 55-60 per cent. It would be great to get the plant breeders to improve that for us.

“We can calculate from all that a theoretical yield we should be able to produce.” 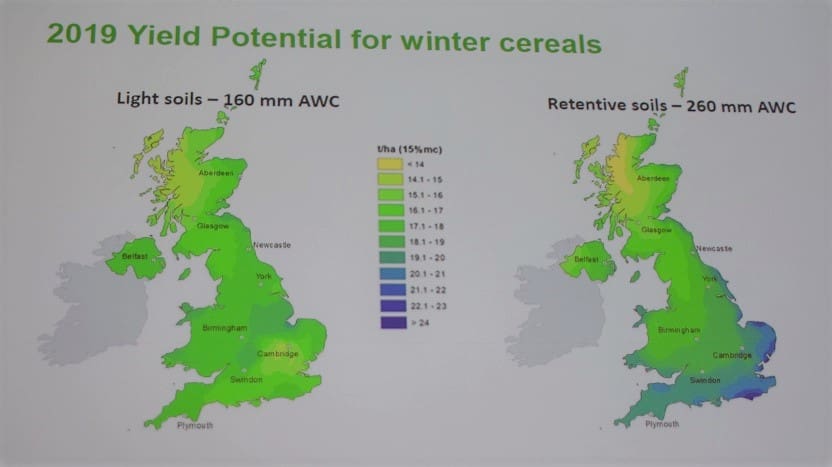 Mr Norman said in a competition last season where each farmer submitted a field for yield measurement, the top yield at harvest was 16.3t/ha on a farm in the Midlands.

“That is a fantastic achievement, but it still falls short of the yield potential where 20-plus tonnes a hectare theoretically is the maximum (for that farm),” he said.

Mr Norman said a comparison of those farmers who produced crops close to their theoretical optimum yields with those who didn’t found there was very little difference in the inputs applied by the farmers. The main difference was the grower’s attitude and approach.

“The character of the farmer was the biggest indicator of success. Two people can have the same inputs, but their approach to how they use them and the micro-detail of what they do every day is where the grower has a big effect,” he said.

Comparing crop production in the UK with that in Australia, Mr Norman said the main differences were growing season length, rainfall, temperature and input costs. 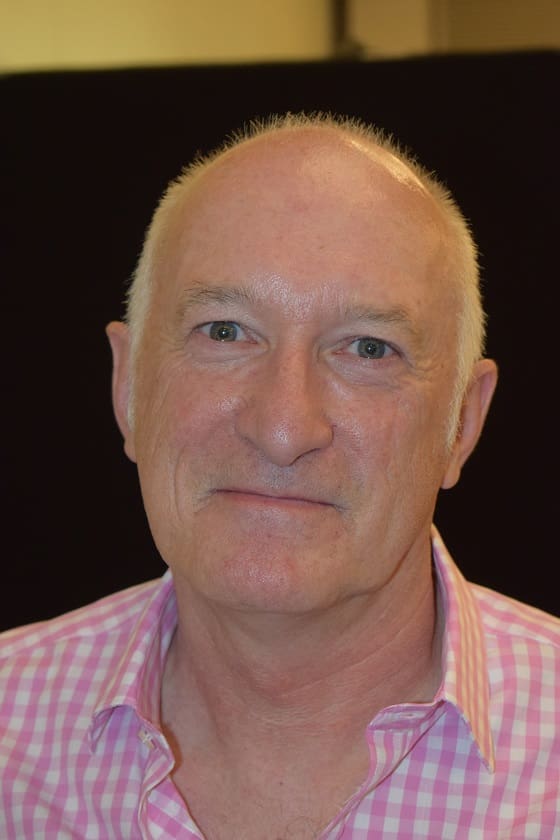 “Some of our varieties are in for nearly 12 months whereas in Australia you sow March/April and harvest November/December,” he said

“The other big difference is Australia is very much constrained by rainfall and temperature. There is no doubt we have been seeing temperatures rise in the UK but we usually have a good, month-by-month rainfall event. We get about 650 millimetres in the east side of the country to about 1000mm in the west.

“Because of that our biggest problem is disease control, especially septoria tritici (blotch). It is very common for growers to apply four fungicides from growth stage 30. In a very wet season there might be an extra one as well. We are very much governed on the input of fungicides by our climate.

“What we need to get better at is predicting how many applications we need. If we have better intelligence gathering about what is out there in the field with spore numbers and if the conditions right for the disease to develop we could be a lot more targeted with our interventions and reduce the number from five or six down to three or four.”

Mr Norman said recent exceptional rainfall and widespread flooding in the UK meant very little of the national crop had been planted.

“That has put a lot of pressure on spring seed and crop types. The natural ‘go to’ would be spring barley, spring wheat, spring peas and spring beans. But all of the seed supplies have run out of all of those,” he said.

“So, we are looking at large areas of the UK remaining in fallow. Without a crop to dry them out we could well be seeing problems this coming autumn in terms of establishment on fields that are still very wet.”