UNIVERSITY of Southern Queensland (USQ) PhD candidate Anna Balzer is looking at one of Australia’s most important stockfeed grains, sorghum, in a new light. 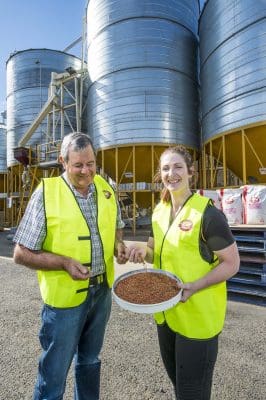 Anna Balzer USQ researcher with Ron Plant at MaralongHer preliminary research has shown signs that sorghum can alleviate the symptoms of metabolic syndrome in humans by improving liver health in the face of the obesity epidemic which is plaguing many developed nations.

“Obesity increases the risk of developing cardiovascular disease and diabetes, and my research shows sorghum has the potential to be a food which can be included in the human diet to minimise the risk of them developing or worsening,” Ms Balzer said.

Sorghum has also been shown to reduce cholesterol levels in fat rats, and is associated with greater satiety.

“We found the addition of sorghum to the diet reduced food intake in fat rats because sorghum tends to be slow digesting, which can help you feel fuller for longer.”

Ms Balzer’s PhD supervisor, Dr Sunil Panchal from USQ’s Functional Foods Research Group, said her research was significant because it identified one of the world’s most common grains as a possible treatment for some of the developed world’s most serious health problems.

“Sorghum may well emerge as an affordable functional food with multiple uses and a long shelf life,” Dr Panchal said.

Ms Balzer has connected with the team at Maralong Milling at Westbrook to source some of the sorghum products used in her research.

In terms of organ health, sorghum appears to reduce steatosis, the infiltration of liver cells with fat because of a disturbance of the metabolism through a range of conditions including Western style diet, drug therapy and excess alcohol consumption.

“With a high-fat diet, we tend to see large liver cells which have fat deposits in them. When we added sorghum, it reduced the fat stored in the cells of the liver.”

“Although we couldn’t completely normalise all the symptoms of metabolic syndrome, we did see improvements in the liver, glucose tolerance and cholesterol levels.”

Ms Balzer said her research is continuing to look at some of the changes sorghum can cause on a cellular level.

“We hope to determine whether we can improve gastrointestinal health, and potentially look for proteins which are involved in glucose regulation, which is especially important for preventing diabetes.”

Sorghum is already available in a range of health-food products, including gluten-free breakfast cereals and flours, and ancient grain rice substitutes.

“As our research brings more results to light, we will be looking to work with partners in related industries to support our research and help us publicise the benefits of sorghum for human consumption.”