THE Victorian Government has this week announced $5 million in relief measures for farmers and communities affected by drought, which include special provisions for parts of southeastern Victoria’s Gippsland region. 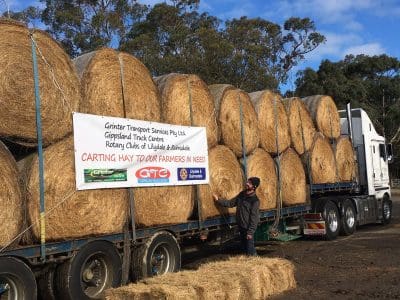 Drought is forcing East Gippsland graziers to source hay from outside their district.

Gippsland is a key dairying, beef and lamb producing area, which is normally self-sufficient through pasture and fodder production.

However, prolonged dry conditions in East Gippsland have seen the region buying in hay and grain to feed stock, further tightening the state’s reserves which have been drawn upon by drought-hit graziers in New South Wales.

“There are circumstances of prolonged dry and drought where self-reliance and sheer determination are not enough on their own. That point has now been reached in parts of Victoria,” Victorian Farmers’ Federation (VFF) president, David Jochinke, said in response to the announcement.

“Dry conditions, late-season frost events and high fodder and water prices going into spring are all currently creating challenges in parts of the state.”

The Victorian Government package includes $1.4 million for Drought Infrastructure Grants, which fund the cost for producers of fencing areas to contain stock.

The package has contributed $1.2 million to the Drought Employment Program, which will allow workers from drought-affected sectors to be employed in the Wellington and East Gippsland by local Catchment Management Authorities.

The Victorian Government will also be spending $1.8 million as part of the Plan2Farm program to help irrigators in the Goulburn Murray Irrigation District with financial and land management decisions.

Remaining funding will go towards technical and business support for farmers to manage financial decisions linked to drought, mental-health support, a community resilience program, and the Rural Financial Counselling Service.

VFF has welcomed the funding package, which was formulated with input from the organisation, but said more was needed.

“Farmers have highlighted the need for measures including relief from fixed costs such as their council rates, as well as improved heavy vehicle regulation to facilitate movement of hay and fodder, investment in stock containment areas and appropriate mental health and counselling services,” Mr Jochinke said.

“In the lead-up to the 2018 state election, we need a genuine commitment from our political leaders to a vision which delivers for agriculture and does not ignore the long term-issues which Victoria’s farmers have been raising for years.

“We need a decent regional and rural roads network, we need relief from the rates burden with reports coming in of increases of up to 40 per cent on some farm properties, and we need to address the infrastructure deficit between rural and regional Victoria.”