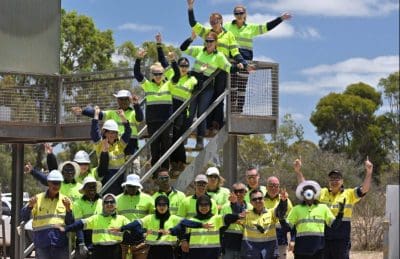 Staff at Viterra’s Rudall site on Eyre Peninsula celebrate the network’s biggest ever month of December 2022, when 5.2Mt was delivered. Photo: Viterra

GROWERS in South Australia and western Victoria delivered 1 million tonnes (Mt) of grain into the Viterra network in the week to Sunday to take the bulk handler’s total intake for the 2022-23 harvest so far to almost 8Mt.

In its weekly receivals report out today, Viterra said the past week’s deliveries have seen both the Western and Central regions pass the 3Mt mark.

Wheat made up the bulk of deliveries to the Viterra network, with the late start and big crop extending harvest into 2023 for many southern Australian growers.

A total of nine Viterra sites have now had a record-breaking season of grower deliveries.

Viterra Wolseley also broke its daily record for a third time this season on Monday after breaking it on December 29 and then December 30.

“While deliveries into some areas are starting to slow, most sites remain open, some are available via appointment to provide options for those still harvesting and a few have closed as the local growers’ season has finished,” Viterra general manager operations Gavin Cavanagh said.

In order to help Viterra move the bumper crop to domestic and international markets, the company is calling for applications for more than 30 operator roles across its Western and Central regions.