Incomes declined for all other states with Tasmania seeing the sharpest drop at 60pc, followed by New South Wales on 13pc, Victoria down 3pc and Queensland down 2pc.

WA’s returns boosted the national figure with Australian cropping cash incomes estimated to have increased by around 28pc to average $619,000 per farm in 2021–22.

ABARES executive director Jared Greenville said the overall rise was mainly due to higher receipts for wheat, barley and oilseeds.

“We can put this down to higher receipts from wheat, barley, oilseeds, and grain legumes.

“That said, prices are higher for farm inputs such as fuel and fertiliser, and this has affected returns and will do so even more into 2022-23.”

“Over the long-term, average annual productivity growth in the broadacre industry was 1pc.

“Looking beyond the averages, we see that broadacre-sector performance is being driven by larger farms, with the largest 10pc of broadacre farms producing around half of total output, while the smallest 50pc of farms produce around 10pc of total output.” 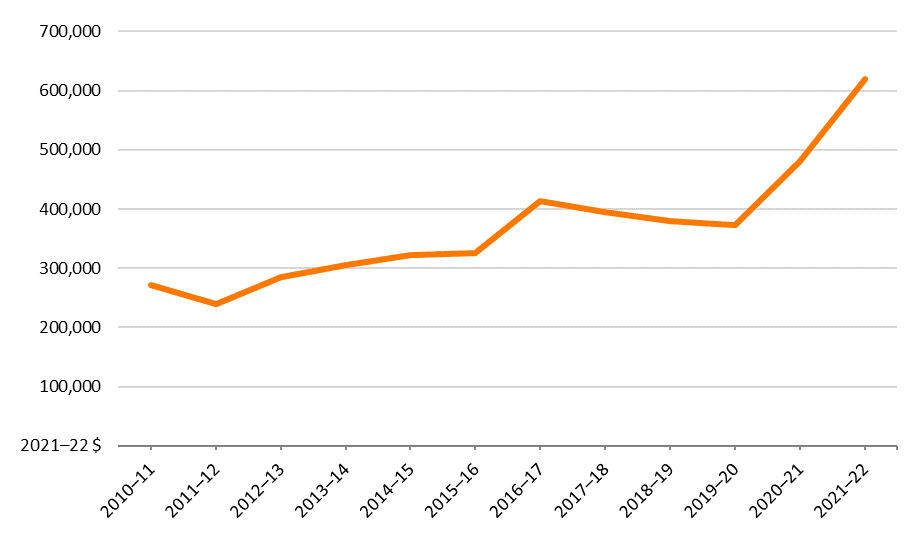 The success of WA operations in 2021-22 was further highlighted when ABARES examined the cropping-only or specialist cropping farms.

It was the only state to see this result in all cropping regions.

Nationally, specialist cropping performed well, with farm cash incomes 89pc above the average in real terms for the previous 10 years.

Mixed livestock-cropping operations also saw substantial increases, with  average farm cash income estimated to have been around $396,000 per farm in 2021-22, around 63pc above the average in real terms for the previous 10 years.

At the national scale, average cropping farm debt increased by 7pc over 2020-21, with most of the increase going towards land purchases.

Improvements in farmers’ equity position was mainly due to a rise in average land values in 2020-21.

Approximately 18pc or 16,000 Australian farm businesses are classified as cropping farms, of which 7500 are specialist cropping farms and around 8900 are mixed livestock-cropping farms.

The findings from the report are drawn from ABARES Australian Agricultural and Grazing Industries Survey (AAGIS).