WESTERN Australian farmers who have been affected by the flooding caused by recent heavy rains are now able to access the WA Natural Disaster Relief and Recovery Arrangements (WANDRRA) fund. 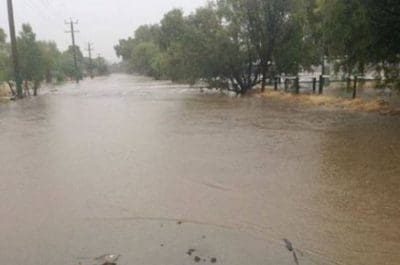 While most of Australia sweltered under heat wave conditions last weekend, much of WA’s wheatbelt was inundated with heavy rain and flooding.

With much of the state having been declared a natural disaster zone, the fund has been opened to assist those who have suffered from the direct impact of the floods.

WAFarmers president Tony York said while the rains missed harvest, there would be remedial works needed on farms to prepare for the new season.

“While having some moisture in the soil ahead of seeding is a good thing, these extremely heavy rains and, in some cases, floods would have resulted in loss of topsoil and uneven paddocks, so work will need to be done to prepare the land in time for the upcoming season,” he said.

“Further, there will have been damage to fencing, not to mention potential loss of livestock.

“As yet the extent of the damage is unclear, but with local government authorities within the City of Swan, and Mid West, Wheatbelt, Goldfields-Esperance, Kimberley, Pilbara, and Great Southern Regions all now able to access the WANDRRA fund, it is hoped that the damage can be assessed quickly and repairs done.”

As advised on the Office of Emergency Management (OEM) website, assistance can be provided to primary producers under WANDRRA in the following areas:

Speaking on one of the six WAFarmers Policy Priorities for the State Election, Mr York said climatic conditions in the South West led to increased fuel loads and, combined with the forestry and native vegetation in the region, had created a real need for regular fire mitigation procedures to be implemented.

“The Department of Parks and Wildlife’s inability to meet its prescribed burn target of 200,000 hectares of forest and bushland each financial year and its focus on metropolitan-based burns creates a dangerous environment for future prescribed burning to occur, and presents high fuel loads that could lead to catastrophic fire conditions,” he said.

“As owner and manager of Crown Land Reserves in WA, the State Government has both a moral and legal responsibility to minimise the risk of harm to its neighbours from fire originating within its property, however a drastic change is required before it can be said the Crown is fulfilling its obligations.”

Mr York said WAFarmers would like to see the following actioned:

“A ring fenced fire mitigation trust fund would be jointly funded from Royalties for Regions and the Federal Government, with the charter of generating indefinite funding for ongoing fire mitigation works in the areas of Crown Land immediately surrounding and within a buffer width of five kilometres or suitable distance from private property,” he said.

“The 2014 Australian Productivity Commission Inquiry Report into Natural Disaster Funding recommended that the states shoulder a greater share of natural disaster recovery costs to enhance incentives to manage, mitigate and insure against these risks, which would give State and Local Governments autonomy in how they pursue disaster recovery and mitigation.

“Management would be assumed by local fire brigades, in coordination with Local Government and overseen by a dedicated state-wide Fire Mitigation Board, which importantly must be allowed to be independent of the Departments of Emergency Services and Parks and Wildlife.”