WITH the Western Australian winter crop harvest winding up in the next two weeks, the state is on track to produce close to 16.5 million tonnes (Mt), a figure that most thought was unachievable following the very dry finishing conditions.

The Grain Industry Association of WA’s (GIWA) latest crop report shows earlier estimates for all crops to produce just under 15Mt underestimated the ability of crops to finish so well on very little rainfall, turning a below average year into one that will now be above average.

Mild conditions, lack of frost, favourable timing of rainfall events and large areas of ameliorated soils have combined to give us this incredible result.

Wheat grain quality has been good with about 40 per cent less than 10.5pc protein and a much higher proportion in the premium grades than recent years.

Wheat grain protein has held up in 2020 due to adequate fertiliser application by growers from early season predictions of an above average rainfall year and the grain filling slowly through spring.

Wheat “off grades” are low with less than 8pc downgraded from weather damage or very high screenings.

Noodle wheat quality has been excellent considering the series of rainfall events in the early stages of harvest.

There is the usual 10pc or so of hard grade wheat from areas that had a very tight finish.

Barley grain yields have been exceptional and with final tonnage likely to be around 4.5Mt in a year with reduced plantings of 1.65 million hectares, the average grain yield across the state will be around 2.72t/ha which is equal to the near record grain production year in 2018.

Canola tonnage is back to the levels of several years ago with average grain yield likely to be around 1.45t/ha, just behind 2018 where average canola grain yields were 1.46t/ha.

Oat grain quality has been very good with some impressive yields and many making Oat1. Growers reacted quickly to the fading season by knocking down droughted crops for hay early to maximise price, leaving the better areas to go to grain.

The reduced lupin area in 2020 still produced a reasonable tonnage with crops in the traditional northern regions yielding very well and the majority of the planted area further south yielding above long-term averages.

Harvest is almost finished in the north with grain yields across the board much better than expected.

The wind damaged soils that caused a lot of stress for many growers early in the season have come back remarkably well considering how they looked earlier on. Yields on ameliorated soils from Mingenew to Binnu have been very good for all crops and consistent with recent years’, they have performed better than the non-ameliorated soils.

Wheat yields are higher than expected and tonnages are the most they have been for a long time, potentially higher than 2016 and 2017. With low rain but efficient timing, water use efficiency is at 25 to 30kg/millimetre.

There has been less rain this year than in 2019, but yields are at least double in some cases.

East of the Great Northern Highway from Morawa to Canna to Perenjori has had low yields. This patch has unfortunately been poor all year. Coorow to Watheroo to Moora is below average, especially the heavier soils and poor sands.

Devil wheat has beaten Sceptre when yields were above 2 t/ha. Vixen and Chief also look great. Noodle growers will continue with some area but all varieties seem outclassed by Chief, Vixen and Devil.

Canola grain yields were higher closer to the coast where there was more rainfall. There were still some very good yields further east on previously deep ripped country and the well managed crops.

Barley all went to feed with high screenings as expected even with the slow finish. The backing off in area from previous years from the late start still produced more grain than expected.

Lupins have been very good on the with an average of about 2 t/ha across the region. The wet August and mild spring helped pod set, as it did for canola.

The message from 2020 “Never give up, look after your soils as it will recover and reward you”.

Harvest will be just about finished by the end of this week.

Wheat quality in the area is lower than average with low test weight and screenings, while protein is  up.

Zen has been very good, as has Chief. Sceptre has been about average. Ninja has high screenings but with grading is making Noodle. The downgrade in price this year has made it worthwhile to grade.

There was less barley area planted in 2020 than in previous years’ due to the late start. Most crops have yielded below average with high screenings. Spartacus has in most cases made malt, Planet made feed and Bass made feed. Bass has had staining and mould issues so this will be its swan song. The Bass area will go to anything other than barley in 2021.

Canola has yielded better than expected. The Moora flats have been disappointing but west and east (Victoria Plains and Dalwallinu) yields have been good. Oils are about average at 45 per cent.

Lupins-have higher yields than expected in most areas except for the Moora flats.

Wheat quality is lower than average with low test weight and screenings, while protein is up.

Overall, the heavier soils have been poor for yield and quality, other soil types are average while ameliorated soils are well above average. There have been no falling numbers problems apparent.

In general, the light soils in the central wheatbelt are 0.5 to 0.75 tonnes better than heavier soil types.

Canola yields are up on expectations. Oil percentages have been in the low 40s on heavier soils but above 45pc on gravel and good sandplain.

Lupins have yielded well with growers needing to sell to CBH where they normally would have had enough of their own storage.

Wheat grain yields have been higher than expected although quality has been variable. Western districts are worse than the eastern areas (Trayning, Merredin, Muntadgin). In eastern areas, the big crops needed some spring rain and have high screenings and require grading. In the west, sand and duplex soils have only 1 to 2pc screenings with protein at 10.5 to 11pc.

These are remarkable yields for the rainfall. Quairading had 120mm growing season rainfall and 80mm in February and is averaging 1.2 t/ha.

The very good strip north of Merredin has contributed a lot of tonnes to the region nullifying the very poor areas to the north and east. The region will produce an above average tonnage although the difference between the good and bad areas is stark.

Apart from the very dry areas on the northern fringe and areas east of Bodallin, most growers have been surprised how well wheat crops have yielded on very little moisture.

Growers are massively over budget for yields in the Kojonup district. Barley without constraints has yielded around 5.5t/ha, wheat at 4.5t/ha, canola at 2.4t/ha (about 50pc better than expected) with 47 to 50pc.

Wheat yields are up on average but seemingly with not enough N for protein expression. Illabo germinated late March into April, disappointing with around 4t/ha. Perhaps early N was needed rather than waiting until seeding was finished six to eight weeks later (in early June).

For 2021, nutrient levels will need to rise to account for this good season, the third in a row. It will be time for more P, N and K across the board.

Canola yields are much higher than forecast (Stingray is soaring). Very surprising given the short stature of the plants. The cool September and October was the key with temperatures less than 25 degrees Celsius during that time. Water use efficiency has been about 14 for canola which was calculated to include 2019 November/December rain to try and bring it down.

Planet barley cannot cope with a tight finish and has ended up with high screenings and low test weigh, 50 to 51 Hectolitre weight. This won’t affect the planted barley area for 2021 though. Maximus is more likely to take area from Planet.

Yields are as expected starting at 2.5 t/ha, 3.6 t/ha at Ongerup and Gairdner, below 3 t/ha at Wellstead, 5 t/ha average in the west with Frankland averaging 6t/ha. Some reports of 8t/ha to 9/ha in individual paddocks and 10t/ha on the monitor, completely surpassing expectations.

Wheat in the area is mostly disappointing. Frost north of the Stirling’s did more damage than first thought. Yields are around 2.5t/ha, some less than 2t/ha. Gairdner is only about 1.5t/ha to 2t/ha.

Wheat harvest is only just starting in the southern areas.

Falling numbers have been a concern at about 250 but not much is being downgraded for now.

Broomehill noodle yields have been poor with high screenings.

Lupins are very short but yielding well, averaging 1.8t/ha. Beans have been excellent at 2 to 4t/ha. Prices are only $350/t from Perth so most will go for feed locally or be stored on-farm.

Growers are mostly very happy in the north Albany zone. Yields are average to above average. With above average pricing, most are making money this year. The districts that were dry all season did not finish as well as expected. It has been a good result overall, especially for the growing season rainfall.

The value of summer rain was shown by an oat crop that ran out of water in early August and went  red.

Grain quality has been okay although protein has been low. Growers in the region backed off on fertiliser early in the season when it was obvious the rainfall was falling away and instead relied on mineralisation of nitrogen in the spring more so than normal. Whether it was the dry spring reducing the amount of mineralisation, or the dry but cool spring allowing extra yield and diluting the protein, the result has been low protein for most growers.

Harvest is almost finished for most in the zone with very little to go after this week. Harvest has been a bit frustrating with weather delays and around 70 to 100mm of rain in November. Chief and Sceptre suffered some damage from the rain, although overall, not too much.

Canola-has performed mostly better than anticipated. Hybrids continue to yield well and will continue to increase in the area. The north mallee and north west regions have been poor with wheat reported at 400kg/ha. Eastern areas have been very good after critical August rain.

Some Planet barley has made malt but high screenings has most barley in the zone making feed.

Beans are mostly being stored due to low prices sand yields have been good.

Lupin grain yields are 2 to 3t/ha.

Wheat yields have been very good in eastern, central and coastal areas. With better protein than usual in the zone.

The WA Department of Primary Industries and Regional Development’s Ian Foster said after a growing season that delivered well below average rainfall, November was much wetter than normal across the agricultural area. This caused widespread harvest delays, some rain and hail damage, as well as quality risks to standing crops.

December should see a return to normal rainfall amounts, despite an outlook for wetter conditions as this is a traditionally dry time of year for the south of WA.

Most climate models are indicating the 2020/21 summer is more likely to be wetter than normal, influenced by the current La Niña event in the Pacific Ocean.

Figure 1 below shows the chances of exceeding median rain for January to March 2021 from the Bureau of Meteorology’s ACCESS-S1 model. DPIRD’s statistical model has a mixed rainfall outlook for December 2020 to February 2021, based on the November global climate. 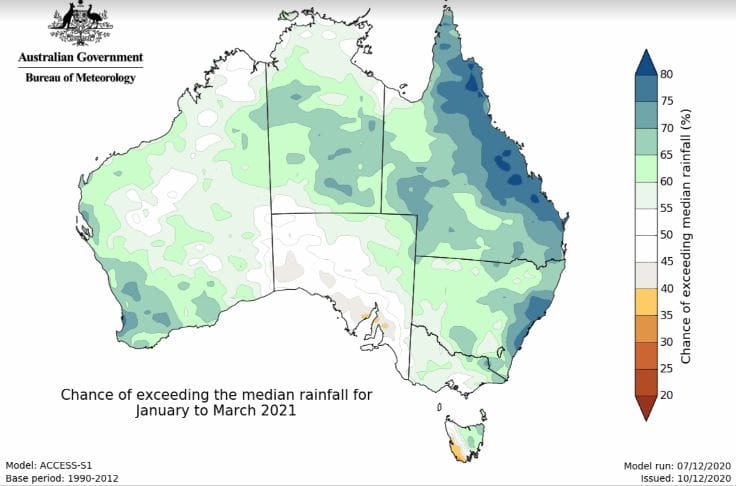