Recent rains have set up ideal conditions for Darling Downs grower, Matt McVeigh, to get cracking planting cotton on his family’s farms near Dalby this week.

COTTON planting is well underway in the eastern cropping belt where depleted water reserves and muted irrigation allocations will limit the potential crop to 2.2 million bales – fewer than half last season’s 4.6-million-bale crop.

Cotton Australia chief executive officer, Adam Kay, said recent rains, particularly on the Darling Downs, had encouraged extra dryland plantings, but across the eastern growing region the cotton area would be restricted by the drought and low levels in water storages.

“There hasn’t been enough rain anywhere to impact irrigation allocations. All the rain has done has made some people consider dryland,” he said.

“A lot of country has gone to sorghum already, but with cotton around $640/bale people are considering it.” Click on table to enlarge.
(Source: Cotton Australia) (Note: Forecast subject to change with every fall of rain.)

Left Field Solutions’ Pete Johnson said prices for next year’s cotton had come back in the last week or so to around $620/bale, but that still meant good potential returns for growers.

“Trade jitters with the United States/China trade war, emerging market weakness and currency depreciation in a range of our key markets like Indonesia and India have dented the confidence of mills to aggressively buy cotton forward. So, from the demand side, it has become a bit more tepid than it was earlier in the year,” he said.

“But, at the same time, the Australian dollar has softened to US71 cents or thereabouts and that is helping the cash price here. And there are a few quality issues potentially rearing their head in the US which will assist Aussie basis, along with a smaller crop here as well.

“So, I think right now it is hard to get madly excited about the price rising dramatically from where it is at the moment, but $620/bale is still great money. This 2019 crop is probably 50 to 60 per cent forward sold by growers already at good levels.”

Ideal start on the Downs

For growers on the Darling Downs like Matt McVeigh, who farms with his family in the Dalby area, recent rains have set up ideal conditions to get summer planting underway. 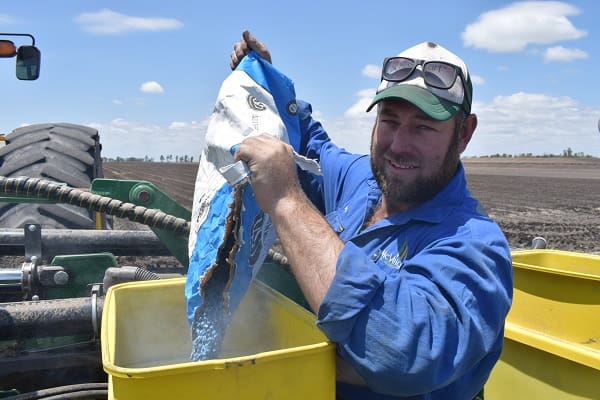 Matt McVeigh fills the planter with cotton seed on his family’s Dalby farm.

The rain came as a welcome turnaround to what Mr McVeigh described as “our worst winter ever” when they grew virtually no winter crop.

“The rain has been fantastic. A month ago we thought we were going to have nothing, but we have had about 200 millimetres now,” he said.

“It is one of the better starts we have had for summer cropping in four or five years. It is perfect timing for cotton planting. We’ve started this week with mostly irrigated, but some dryland.”

While cotton will be the mainstay crop for the McVeighs, like other farmers in the district they will also go big with sorghum this year.

They have been sowing sorghum for the past week or so and also plan to put in a later plant of sorghum if conditions allow.

“Seventy-five to 80 per cent of the summer crop will hopefully go in on this rain. There is some ground not as wet as we thought so we will wait for another rain event and do a later plant so we are not running into the heat,” he said.

“If we catch a bit more water, we would also like to do some late corn and mungbeans.”

In its latest seasonal update, Cotton Seed Distributors (CSD) reports cotton planting is well underway from Central Queensland through into New South Wales, and has been completed in southern NSW where the season is shorter.

Darling Downs: Good rainfall over the last few weeks has seen a significant boost to the dryland cotton plant. Planting will be in full swing over the next couple of weeks as the ground dries out.

Border Rivers: Irrigated areas will be back on last season with upstream storages sitting around a combined 45 per cent capacity. Dryland opportunities remain fluid.

Gwydir Valley: Planting is well underway, with irrigators about halfway through their hectares for this year. The irrigated area is well down, with estimates around 15,000 hectares. Skip row and semi irrigated options are being taken up with growers optimistic for in-season rainfall.

Namoi Valley: With about 85pc of this season’s crop planted to date, the total area is expected to be around 24,000ha, substantially down on last year. The dryland area still remains low.

Central NSW: Planting is progressing as soil temperatures warm up. Burrendong Dam is now at 23.1pc and falling. There have been record low inflows there for the last 18 months. Bourke will have no cotton at this stage.

Southern NSW: Planting finished at the end of October. The area is expected to be only half of what was planted last year due to high water prices. Most planting started early October and was in by mid-October. To date, establishment for the early October planting has been extremely good.