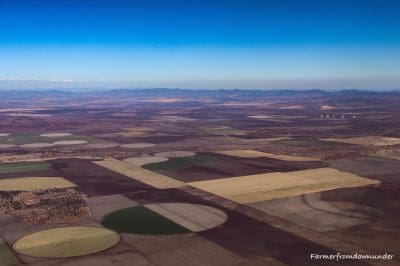 Weekend rain has done little to change planting prospects on the Liverpool Plains, where nearly all sorghum planted to date is under irrigation. Photo: Farmer from Down Under

WEEKEND rain has done little to boost hopes for a widespread sorghum planting in northern New South Wales and Queensland, but has brought some paddocks one fall closer to their next crop.

A front moving east delivered rain from Friday to Monday, with grazing districts in western Queensland, and parts of NSW faring the best.

According to the Bureau of Meteorology, Southern Queensland’s main sorghum-growing districts, the Darling and Western Downs, recorded little rain, with Miles on 11 millimetres being the only station to record double-digit falls in the week to 9am today.

With the early sorghum-planting window now closing in southern Queensland, these falls are unlikely to spark any widespread sowing.

In Central Queensland, where sorghum is not planted until January, falls were patchy, with Clermont getting 17mm, Emerald 5mm and Springsure 21mm.

Falls everywhere were steady and gentle, and amounts were varied across the cropping districts of NSW, with Moree registering 5mm, Mungindi  7mm, Narrabri 21mm and Walgett 26mm.

Liverpool Plains growers will plant sorghum up to Christmas, and those who got 40mm or more in weekend falls may advance their planting to something from nothing, or put in a dryland paddock to add to what has already gone in under irrigation.

Quirindi-based indepent agronomist Pete McKenzie said registrations were above 45mm in some cases, but most Liverpool Plains gauges recorded 20-30mm.

“There’s probably not going to be much sowing because there’s just not enough moisture to plant with confidence,” Mr McKenzie said.

“Anybody that had 40mm plus is close to having their suboil and their topsoil moisture meet up, but most people are going to need 100-200mm to start.”

If that falls before the end of January, Liverpool Plains growers will plant what they can to sorghum to generate some cashflow.

“The later crops have performed reasonably well in the past couple of years, so if we can get the rain we need, it will go in.”

“The odd block has been planted to sorghum, but it’s mostly irrigated, and some irrigated cotton has gone in too.”

Mr McKenzie said insufficient rain to allow a confident sorghum planting will see growers hold over moisture and hope for soaking rain in time for a winter-crop planting.

He has estimated only 5-10pc of intended sorghum area has been planted to date on the Liverpool Plains.

“If we had the same (rain) again next week, we wouldn’t get to 20pc of our potential sorghum area.”

The Liverpool Plains is a major winter and summer-cropping area, and its previous widespread rain event was 40-50mm in May, with 10-30mm falling in showers from June to October.

Pursehouse Rural senior agronomist Matt Roseby at Gunnedah said the region had run out of long-fallow paddocks to plant into, and options for growers remained limited without further rain.

Mr Roseby said good rain in the next four weeks would prompt a big sorghum planting, but if rain fell after Christmas, attention would switch to corn, mungbeans and sunflowers.

In southern Queensland and northern NSW, harvest of winter crops is over for most growers.

“That will be seed for next year,” he said.

“The quality has been reasonable, but the yields are down.”

Very little grain being harvested in northern NSW is making its way into the cash market, with most growers either selling direct to a consumer, or storing on-farm for their own use.

“Quite a few crops have been cut for hay, and that’s going to graziers, and mostly the local guys.”

Mr Roseby estimates up to three-quarters of the region’s winter crops were cut for hay, which has been stored for on-farm use, or sold at $400-$450/t ahead of the later and cheaper hay from southern NSW and Victoria which has hit the market in recent weeks.