Creating pathways for the next farming generation: Nuffield

FARMING is all about the management of five key elements – land, water, equipment, capital and people, according to north west New South Wales mixed farmer and Nuffield scholar, Daniel Kahl. 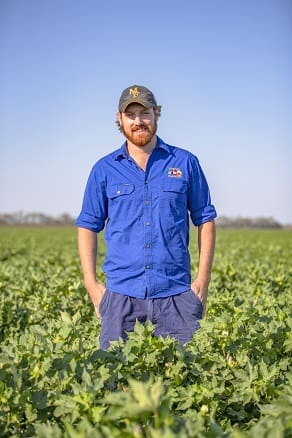 Business strategies are based on creating the best return on all these resources and, more often than not, it’s the availability of water that drives farming decisions.

After expansion in his family operation at Wee Waa and helping to restructure their farm management, Mr Kahl set out to explore the limitations around the fifth element, people.

Supported by Cotton Research and Development Corporation and Cotton Australia, Mr Kahl received a 2017 Nuffield Scholarship to examine ‘the missing middle’, a term highlighting the gap in middle management to support both decision-making and practice change on the land.

“I wanted to understand how the many existing programs around the world attract, upskill and retain talent in agriculture and, in turn, how these programs create a clear pathway that engages the next generation of farmers, setting them on their way to a long-term career in agriculture,” Mr Kahl said.

One of the report’s key recommendations highlights the need to increase exposure to agriculture in primary schools.

“School children dream of being astronauts, firemen and rock stars because these are the careers they are exposed to at a young age that promise excitement and stimulation,” he said.

“Our industry needs to reach children early through curriculum-based initiatives in order to expose them to the possibility of an exciting career in agriculture, something most kids wouldn’t consider if they weren’t from the land.”

Conversely, Mr Kahl’s report also looked at those who already have an inclination towards agriculture, ensuring they are given a head start and a defined career pathway.

“In many countries, education takes young people away from the farm, both literally and figuratively,” he said.

“As technology becomes more pervasive on farm, the future will lie in “thinking” jobs as well as the traditional farming skill set.  The better we can link STEM subjects to agriculture, the clearer the pathway to a rewarding agriculture career will become.”

In his report, Mr Kahl referenced innovative programs such as Agribusiness Careers and Professions, situated in north west NSW, and Cotton Gap, an initiative developed by Cotton Australia.

“Agribusiness Careers and Professions allows students to remain in school for the final two years of education, while spending one day a week working on farm, completing 800 hours of paid work as a trainee,” he said.

“It’s a prime example of how we can capture individuals who are already inclined towards farming, ensuring they continue an education which is practical and served through an agricultural lens.

“Additionally, Cotton Gap offers school leavers, from all walks of life, with the opportunity to work on a cotton farm during their gap year. The experience has already inspired young people to pursue a degree in agriculture or to gain further experience in the industry.”

According to Mr Kahl’s report, continuing to link education with an agricultural career remains crucial throughout tertiary education.

On his travels, he visited United Kingdom poultry business, Faccenda Foods, which takes on five to seven graduate placements from Harper Adams University in Shropshire every year.

“The graduates spend the third year of their degree working on farm or across industry, before returning to complete their fourth and final year,” he said.

“The placement ensures that the knowledge being acquired at the university is moulded in conjunction with the experience. Importantly, for those students who may not have a family farm, it provides a pathway to employment.”

To complete the puzzle, Mr Kahl also investigated how those already working on farm are exposed to continued professional development and growth.

“Future farm managers need a broad range of skills to be successful, however many won’t have the time or capability to undertake full degrees or courses in areas such as finance, business management or human resources,” he said.

“I discovered some great examples of educational providers that are offering shorter, more specialised courses for farm managers, such as the ‘Applied Masters’ developed by faculty at the Aeres Hogeschool in the Netherlands.

“The program requires farm managers to attend a number of short courses to upskill themselves in business management and financial planning in an applied manner and as often as possible on the farms where they are employed.

“Large scale farming enterprises are also offering in-house, formal training to encourage staff to take on management roles. Regardless of the avenue, training should be shortened, specific and applied in order to be successful for the farm sector.” Daniel Kahl speaking with Dutch students at Aeres Hogeschool in the Netherlands.

Ultimately, what Mr Kahl discovered was not that the programs don’t exist to build human capital within agriculture, but these programs need to be better aligned to create a clear pathway to a career in agriculture.

“The resolution of this issue is multi-faceted, but with the backbone of strong career pathways already in place across the world, I’m confident we will be able to connect the dots and set Australian agriculture on a strong trajectory into the future,” he said.