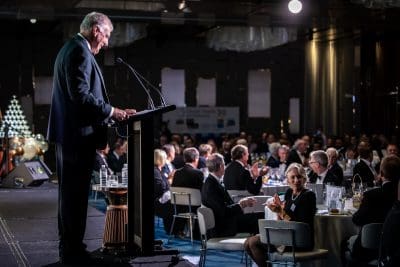 GTA, Australia’s grains industry commercial facilitator, celebrated its origins, evolving from the National Agricultural Commodities Marketing Association (NACMA). The founders built an industry operating environment to fill the voids created when the statutory grains, oilseeds marketers and bulk handlers were to be deregulated.

Around 35 tables were booked by GTA members, traders, brokers and commodity groups to gather their clients for a celebration the likes of which we have not seen since COVID shut gatherings two years ago.

Among the diners’ story topics was the past two COVID years creating the toughest work environment for everyone in business, raising uncertainty, necessitating more time spent on simple tasks and calling on people’s greatest skills of cooperation, patience and flexibility.

We all know punters thrive on volatility, but by this time everyone wanted to see conditions return to fairer weather and plainer sailing.

On the podium, there were warm welcomes from GTA chair Andrew Goyder and CEO Pat O’Shannassy to guests including Ian Brown who was the first NACMA chair in 1991, long-time agricultural journalist and communicator Lucy Broad and universal GTA office manager until 2018, Sheryl Brown.

I recall Rosemary Richards being the key person, working with staff and first CEO Geoff Honey, making Australian Grain Industry Conferences (AGIC) happen through the 2000s and her deep involvement with commodity groups in the prior decade.

The forum moderator Geoff Farnsworth prompted his three panelists to tell some highlights to chart the course of NACMA coalescing from a first meeting, in March 1991, of merchants’ associations.

First meeting attendee Chris Kelly recalled the story of selected spokespersons soon afterwards preparing for a journey to Canberra to meet with officials to outline their plans for adapting to changes underway. Chris said the mission was only partially successful and told how the envoys returned to their home bases with a task set by Canberra to create a united force.

It was to be all in, or nothing.

The broadest objective of the reform-minded Australian government of the day meant that, through the Department of Primary Industries and Energy, the only group the minister would endorse in a deregulated grain environment was one which would engage every existing grain trade association in all parts of Australia.

For want of a Strategic Plan they handed a person with experience, Ron Storey, the task of preparing one.

Tom Keene recalled the bulk handlers were mindful of the opportunities a seat at the table would garner. Their participation later proved pivotal to the financial stability of the venture.

Critical mass came in the early 2000s as member organisations made financial commitments which enabled full-time staffing and a revised plan which saw hundreds of individual businesses seek membership.

GTA became the portal for conduct of Australian business including robust dispute resolution, spliced over time into parts of Australia’s courts system.

Training, technical committees and working groups have had volunteers numbering 2250 people**, GTA says, delivering services from all the sub committees of the board.

Back to the forum where we began…Rosemary Richards recalled a highlight of GTA stepping into the global arena as an early promoter of International Grain Trade Coalition, a meeting of which it later hosted in Australia.  A funny story arose from the Australian meeting as, at the end of a day-long field trip and standing at a country venue looking across an empty paddock, under pressure from some of the international contingent lovers of macropods and other cute furry Australian native animals, when at the very, very last moment Pat O’Shannassy conjured kangaroos in a mob, grazing, in the late afternoon sun, his status among the delighted onlookers rising several notches.

**Footnote: A booklet was prepared for the 30 years anniversary and summarises many facts and dates readers can find on the Graintrade Australia website. The anniversary celebration acknowledges the contribution of those many people in addition whose names are not mentioned, for their energy and constructive deliberation, their support out the front and out the back. For those who have helped others, their reward is in the knowledge they have been part of creating this generational family of grain community, passing along precious skills, knowledge and helping evolve the way we work. 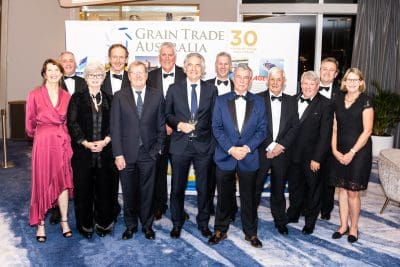 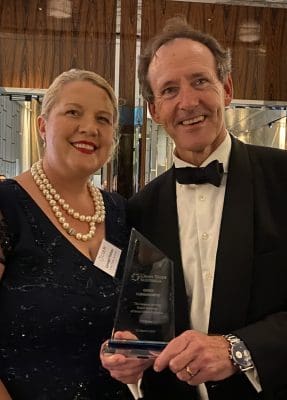 Lyndall Philbey and Geoff Farnsworth. Geoff received a trophy acknowledging him as the longest-serving GTA board member.  Photo: Henry Wells 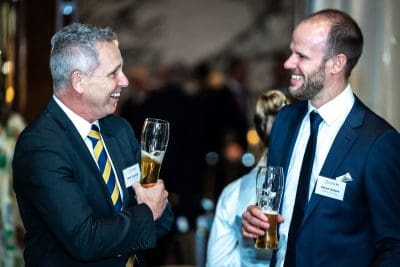 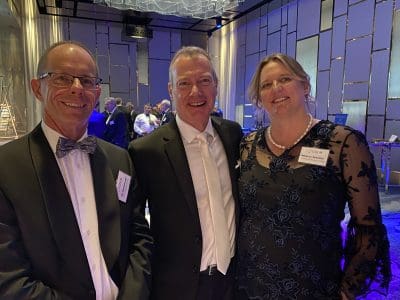 Sporting the theme of the night, “a touch of pearl” past colleagues Ian Desborough, Lyndon Asser and Rebecca Reardon.  Photo: Henry Wells 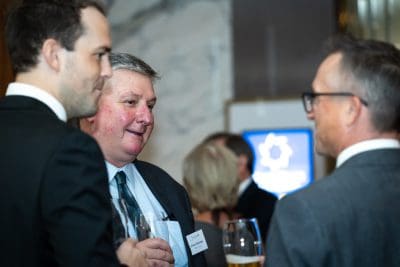 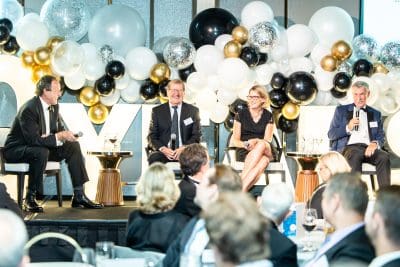 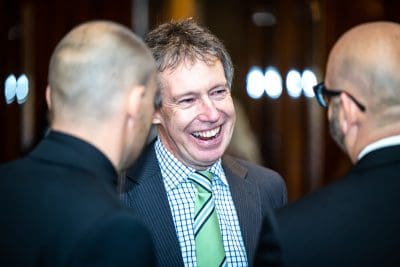 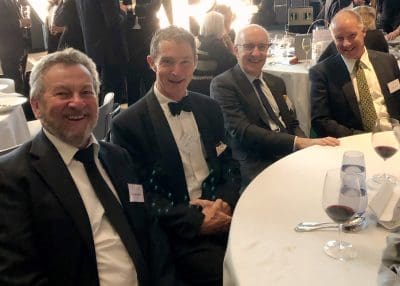 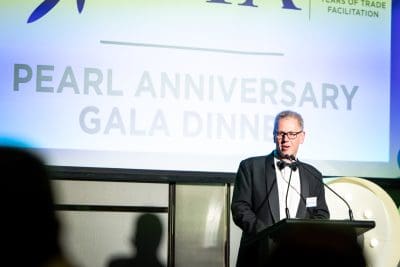 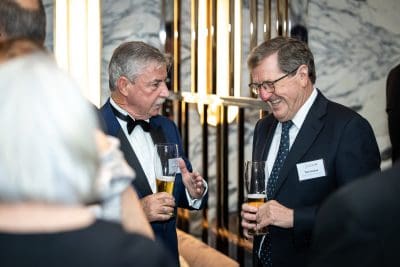 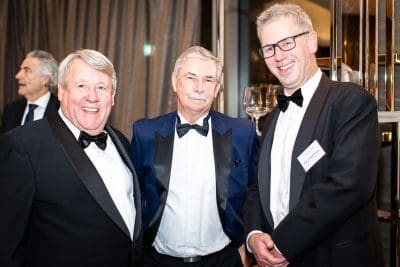