FARMERS of the future will have to find ways to retain even more moisture in their no-till systems, create new energy efficiencies and adopt more sophisticated technologies to remain profitable under increasing pressure from rising land values and external forces. 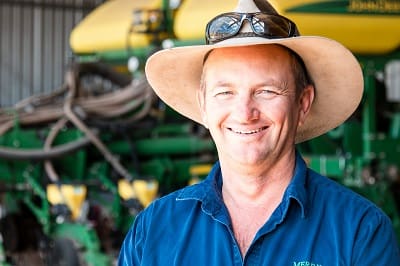 That’s the view of David Brownhill whose family runs a large-scale broadacre cropping and livestock enterprise on the rich, black soils of the Liverpool Plains in north west New South Wales.

Speaking on the Australian Farm Institute’s ‘Conservation Agriculture in 2030’ webinar in December, Mr Brownhill said the next generation of farmers would have to look at things very differently to what he had.

“They will have to because this land has gone from $500/acre to $5000/acre in my farming life, and I don’t think it is stopping there. The problem is it becomes very difficult to make a return,” he said.

“Tractor efficiency and energy consumption in tractors – and whether diesel will even be a thing. Will they be electric tractors? All the whizz bang stuff in the cabs. My son is currently driving a harvester that he puts in (to the machine’s computer) what crop he is going into and it sets itself up. Those sorts of technologies are going to be extraordinary,” he said.

Mr Brownhill said he had been fortunate to farm through a period when there were “lots of new tools” that came along, including glyphosate, controlled traffic farming, precision guidance and the widespread adoption of no-till.

“I’m not sure what’s next. Whether it’s cover crops or whether we get better at managing stubbles so we can save more moisture in the soil to grow the next crop. I can’t see us changing from it being broadacre cropping land,” he said.

“We need quantum leaps. The one-percenters have got us to where we are now. Now we need the two and five-percenters to make a difference in the broadacre space. Maybe vegetables one day. It might be more specific grain crops. Why aren’t we growing more native species?

“In the R&D space, I don’t think there is enough money put into R&D to get us to where we need to be.”

Mr Brownhill said farmers of the future were going to come under more pressure from external drivers than ever before, yet would have far less political representation.

From issues such as water policy to the use of insecticides, herbicides and genetically-modified crops, he said there was a never-ending mix of external forces that farmers had to deal with now that they didn’t have to deal with before.

“Everyone has an opinion from afar on how we should manage this farm, but no-one is helping to pay for it. I have to pay for that. I don’t want the soils to wash away, I don’t want any erosion and we have to do all the best practice, but it comes from our cash,” he said.

“We have more and more interaction from outside the farm gate with everyone having an opinion on what you do, either through social media or politicians. They are not participating in this, they are just having an opinion.

“We have to farm to make sure this farm looks the best it can possibly be all the time. I think we are doing a pretty good job, but at the end of the day it’s private enterprise that funds public opinion. It gets a bit tiresome after a while.”

Throughout the recent drought, Mr Brownhill said the no-till system and its benefits of moisture management were key to getting the farm through the dry times.

“We still managed to grow stuff. We grew a lot of hay. The returns from the hay from a failed wheat crop were as good as what a normal wheat crop would have been because the hay price was through the roof. We were getting 3.5 tonnes/hectare of hay at $400 plus/tonne,” he said.

“It was hard though. We had two spray rigs out in the middle of the night spraying the windrows with water to get enough moisture content to be able to bale it.”

Everyone has an opinion from afar on how we should manage this farm, but no-one is helping to pay for it. I have to pay for that.

On reflection, he said if he’d had the time over again, some country he’d held off planting to wheat because the moisture wasn’t quite right would have been better to have been planted.

“In hindsight we should have (planted) because even a poor germination of wheat would have got us either a grazing opportunity or a hay opportunity in the drought. As it turned out, it didn’t rain again and some of that country didn’t even get a summer crop put in it, so we missed a whole year.”

Mr Brownhill said he had no regrets about the decision to supplementary feed their cow herd for two years in a row during the drought.

“We spent $850/head/year for two years. That sounds like a lot of money, but a cow at the start of the drought was probably worth $1100 where it is now worth $3000 plus. Also, by feeding that cow through the drought we had a calf every year and kept our core herd,” he said.