Grain Central’s inaugural editor, Neil Lyon, is closing up his notebook and keyboard after a 33-year career in agricultural journalism.

IN A career in agriculture spanning nearly 50 years, including 33 as an agricultural journalist, Grain Central editor, Neil Lyon, is set to retire on Friday, December 17.

Mr Lyon leaves a legacy of thousands of stories and millions of words about the people, issues, triumphs and failures of rural Australia.

Likewise, he has experienced the transition in the life of a rural journalist from the days of landline phones, late night phone calls, cameras with wind-on film, rudimentary computers, fax machines, compositing rooms and printeries to emails, the internet, high-tech computers, mobile phones, digital cameras and laptop online publishing.

Born and raised on a beef cattle property near East Gresford in the lower Hunter Valley of New South Wales, Mr Lyon graduated from the Tocal Agricultural College at Paterson in 1974 before returning to the college to work for many years as an instructor and practical skills trainer.

In 1988 at the age of 31 he made the move into agricultural journalism when he joined the NSW “bible of the bush”, The Land newspaper, as a D-grade journalist at its then-head office at North Richmond in north-west Sydney.

Over ensuing years, he went on to be a country rep with the paper at Wagga Wagga in the late 1980s, The Land’s first country rep at Moree throughout the early ‘90s, and a 16-year stint at Tamworth.

During the Tamworth years he held positions of country rep, special writer, crops editor then co-editor of the Australian Farm Journal, and national machinery writer for the Rural Press stable of Australia-wide papers, before returning to North Richmond as The Land’s deputy editor.

In January 2011 he moved to Toowoomba in southern Queensland – a week after the notorious flood that devastated the region – where he was assigned to sister paper, the Queensland Country Life, as cotton and grains writer and, for a second time, national machinery writer.

In 2015 he left the newspapers to work with Seedbed Media developing agronomic material for the GRDC, before stepping back into the ag media world in July 2016 when he became foundation editor of the online cropping industry newswire, Grain Central.

Grain Central, with its wealth of webpage stories and free email news alerts, has gone on to become a successful model of modern-day publishing, complementing its stablemates, Beef Central and Sheep Central.

Mr Lyon’s career in rural journalism has taken him not only around Australia but around the world.

He filed stories from the international dryland farming research centre at ICARDA in Syria in 1992 before the war forced its relocation to Lebanon, and attended the Borlaug Summit at the international wheat breeding centre, CIMMYT, in Mexico in 2014. Both centres provide much of the genetic material that underpins the Australian wheat industry.

He has covered farming and machinery events in New Zealand, the United States, Britain and the SIMA international machinery exhibition in France, and led a farming tour to Ireland.

In 2006 he won the Australian Star Prize for agricultural writing which took him to the International Federation of Agricultural Journalists’ conference in Norway. In retirement, Mr Lyon hopes to further indulge his love of aviation and aeroplanes by flying on several of them to destinations near and far, as Covid permits.

He also plans to improve his tennis and golf, and extend the backyard railway built to entertain the grandchildren, curious visitors and his tolerant wife, Ros, at their home in Toowoomba.

Experienced journalist and long-standing colleague, Liz Wells, will be stepping into the role of Grain Central editor in January, and the Centrals are currently recruiting for an early-career journalist to bolster the team.

“Neil Lyon is the epitome of integrity and professionalism in rural journalism,” Grain Central co-publisher James Nason said.
“The development and growth of Grain Central under Neil’s pioneering editorship is testament to his knowledge, organisational abilities and his deep enthusiasm for the Australian grains and cropping sector.
“He has developed Grain Central into a platform of which we are very proud.
“It has been a tremendous honour to have had Neil as part of our team and we wish him all the very best in his well-earned retirement.”

MURRAY Darling Basin Authority (MDBA) chief executive, Phillip Glyde, has announced his intention to retire after six years at the helm of the organisation. 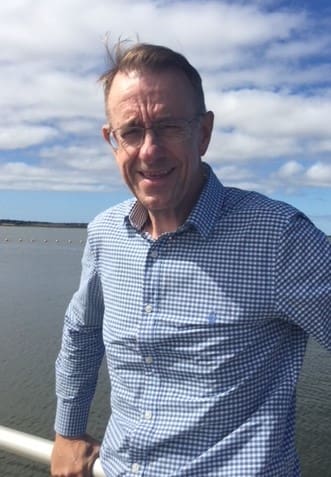 National Irrigators’ Council (NIC) chief executive officer Isaac Jeffrey thanked Mr Glyde for his service to the very challenging water reform process and his role in leading the authority, including during periods of extended drought.

“Water policy and river management are complex, and everyone has an opinion. Under Phillip’s leadership, Basin stakeholders have seen an increase in communications and engagement, and a concerted effort to both inform and listen. NIC acknowledges and welcomes this enhanced consultation and looks forward to it continuing under the new CEO,” he said.

“Phillip has led the move to decentralise MDBA operations which has embedded staff in local communities to help strengthen the Authority’s capacity to understand issues at a local level and to engage local farmers in decision making processes and consultation.”

Mr Glyde’s key achievements were overseeing the northern Basin review, the 2017 SDLAM Determination, the 2020 Basin Plan Evaluation, and the regionalisation of the MDBA.

He has been on long service leave over the past few months and will not be returning to the MDBA.

Mr Schilling is a founding director of GPA’s state member for South Australia, Grain Producers SA, and farms in the Cunliffe area of the South Australian Yorke Peninsula.

“Mark will be a strong contributor and advocate for Australian grain producers, adding to the skills, experience and expertise of our other Board Members and the GPA Policy Council,” Mr Large said.

“Mark’s background in not only grain producing, but start-ups, corporate governance, commercial strategy, and outside of box thinking will strengthen GPA’s strategic advantages, to deliver good outcomes for growers and our industry.”

Mr Schilling said he was passionate about Australian grain farming and food production, with value-adding and sustainability a key focus of his agribusiness pursuits.

“I’ve adopted a value-adding approach to developing and marketing my own farming business on the Yorke Peninsula, building a number of strong brands,” he said.

THE overall champion in a new cotton crop optimisation program will be named in honour of Frank Hadley, one of the pioneering Californian farmers who brought modern cotton production to northern New South Wales.

Cotton Seed Distributors (CSD) in the 2021/22 season will run a pilot program to introduce a cotton crop optimisation benchmarking concept to the Australian cotton industry, highlighting the categories and garnering feedback and improvements.

“The program will harness the desire of Australian cotton growers to improve their performance and the principle of ‘What gets measured gets managed and what gets managed gets done’,” CSD’s marketing and development lead, Peter White, said.

“The grower who receives the Frank Hadley award will be the best cumulative score across the whole program, the standout crop.”

Mr Hadley was the first chairman of CSD. The ICA represents co-operatives from across the world with members from 112 countries and 318 organisations across sectors including agriculture, banking, health, housing, insurance, and services.

The ICA has four regional offices including Asia Pacific, which has an 11-person board.

Ms Browning will represent Australia for a four-year term.

“I am excited to have the opportunity to play a role in increasing awareness and recognition of Australia’s co-ops and mutuals and the important contribution they make to the economy and community in the Asia-Pacific region,” she said.

Ms Browning operates a continuous cropping operation at Kondinin, and joined the CBH Group board as a grower director in 2018. Mr Karamil has worked with the Australian Government’s agriculture department since 2011, and his previous positions include a posting in Washington DC as an agricultural adviser.

India is a significant export market for Australian pulses and cotton, and is seen as a developing market for barley, so Mr Karamil will be involved in discussions around these and other commodities with the Indian Government.

He will replace John Southwell, who has completed his term in the post, and will move to New Delhi early next year to take up the position.

THERE has been a change of guard leading the Western Australian Department of Primary Industries and Regional Development’s (DPIRD) frost research, development and extension.

Dr Bekuma has worked closely with Dr Biddulph over the past two years, particularly on research that has shown the contribution of ice nucleating bacteria to frost damage.

Mr Leske recently returned to DPIRD, after completing his PhD on improving an understanding of crop physiological response to frost.

Grains director Kerry Regan said the new leads were well equipped to continue the department’s valuable work to improve the understanding and management of frost in WA farming systems.

with more than 25 years of combined frost trial experience, will all continue to work on trials at DPIRD’s Dale frost nursery, hosted by Bill and Anne Cleland and managed by Living Farm.

Dr Biddulph has been appointed to the new position of chief primary industries scientist to develop strategies to strengthen DPIRD’s scientific capacity.

NINE individuals from around the country have been selected from a pool of applicants to participate in the 2022 cohort of the Australian Grain Leaders Program (AGLP). 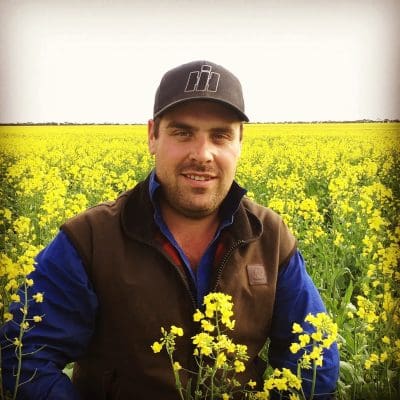 “I always find it exciting to meet the emerging leaders who have decided to step forward and participate in the AGLP. To see the unique leadership and management skills develop in people taking part makes us proud and excited about the future leadership of our Australian grains industry,” GrainGrowers general manager – grower and industry development, Kaitlin Commins, said. 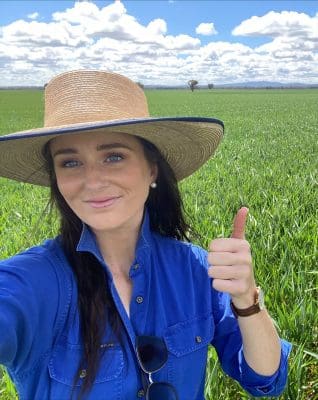 The AGLP has been running for over fourteen years. A key component of the program sees participants complete a project on how a farming business challenge or industry issue can be addressed.

GrainGrowers covers the cost of participants taking part in the year-long program as well as travel and accommodation expenses, which is often a barrier for those in regional locations wanting to participate in more traditional professional development programs. The 2022 program has been ‘pandemic-proofed’ to deliver outcomes even if COVID-19 restrictions continue.