The Seed of Light Award, voted upon by the GRDC Southern Region Panel, acknowledges outstanding effort in the extension of outcomes from GRDC grains research investments.

The winners were presented with their awards at the GRDC Grains Research Update in Bendigo, Victoria, this week. GRDC Southern Region Panel member Kate Wilson said when it came to the extension of new knowledge and advice into pulse crops in the southern region, Mr Brand was without peer.

“What this man does not know about pulse breeding and agronomy is not worth knowing. I speak about Jason’s worth not only on behalf of the grains industry in the south and beyond, but also from personal experience,” she said.

“Over many years I have been privileged to operate as a grower and an adviser in an industry that has benefited enormously from Jason’s dedication, enthusiasm and expertise.

“And while in essence he is a researcher – and a very good one at that – it is his particular efforts in communication and extension that this award acknowledges.”

Dr Brand’s career path in agricultural research began at an early age, having attended Urrbrae Agricultural High School in Adelaide, South Australia, before studying at the University of Adelaide where he completed his PhD in agricultural science in 1999.

He began employment as a Horsham-based pulse research agronomist with Agriculture Victoria in February 2000 and has been there ever since, playing an active role in promoting pulses and their improved management within farming systems in south-eastern Australia.

Dr Brand has been responsible for developing management packages for new pulse varieties and has provided advice to Pulse Breeding Australia on traits suited to modern farming systems.

“In a nutshell, Jason brings genetics and management together and then extends the outcomes to ensure new traits are better utilised,” Mrs Wilson said.

“Each year, he updates our growers and the broader industry on new pulse varieties and the pros and cons of choosing the right variety for any given situation, based on agronomy, disease management and market influences.” GRDC Southern Region Panel chair John Bennett described Dr Schefe as “an asset to our industry” – not just in the region where she works as a research co-ordinator for Riverine Plains Inc and as an independent soil science consultant, but well beyond.

“Cassie is in an elite class. She is one of those researchers who has a rare ability to undertake cutting-edge scientific research and then extend the outcomes of that work to growers and others in an engaging and easy-to-understand fashion, that results in on-farm impact,” Mr Bennet said.

Prior to commencing work with Riverine Plains, Dr Schefe’s career was with what is now known as Agriculture Victoria, where she was first employed as a DPI Cadet in 1996 while studying Agricultural Science.

She then became a research scientist in soil chemistry, working on several GRDC investments.

After completing her PhD studies through a GRDC-funded scholarship, which included study at the University of Naples, Italy, Dr Schefe collaborated with technical experts to develop synchrotron techniques to better understand nutrient reactions in soil.

Dr Schefe began working for Riverine Plains in March 2014 in the capacity of extension officer.

One of the key tasks of this newly-created position was to instigate four grower discussion groups across the Riverine Plains area as part of a GRDC investment to improve the adoption of no-till stubble retained systems in the region by overcoming some of the constraints associated with these systems.

“Over the life of what has been known as the Stubble Initiative, Cassie organised discussion groups and facilitated interaction,” Mr Bennett said.

“She also assisted in the extension of research results from the project through other means, including through presentations at seminars and field days.”

In 2015, Dr Schefe was instrumental in securing additional investment from the GRDC to measure the impact of different stubble treatments on in-canopy temperatures at three large-plot stubble trial sites for the 2015-17 field plot trials.

This investment linked the project into the GRDC’s National Frost Initiative, with all data generated being submitted into the national frost research database for review and analysis. 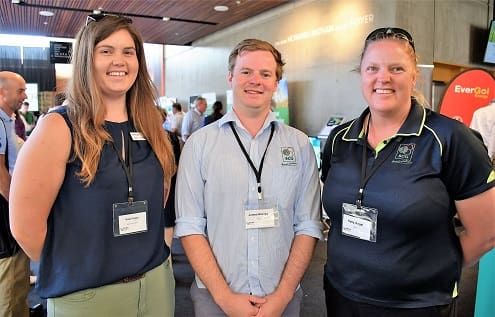