A LEADING pulse agronomist and game changer in the field of break crop research in Western Australia has been named the winner of the 2018 Grains Research and Development Corporation (GRDC) western region Seed of Light award. 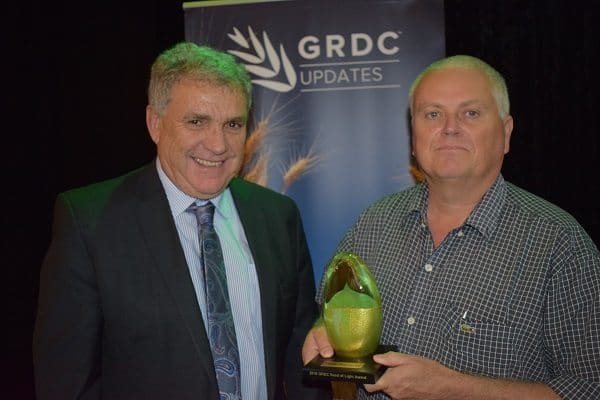 Department of Primary Industries and Regional Development (DPIRD) senior research officer, Mark Seymour, was presented with the award at the GRDC Grains Research Update in Perth.

The annual western region Seed of Light award recognises a person making a major contribution to communicating the outcomes of grains research and development in WA.

Announcing the award, GRDC Western Regional Panel chairman Peter Roberts said Mr Seymour – who is based at DPIRD in Esperance – had an inherent ability to understand and respond to the important issues facing growers and industry.

“Industry can under-estimate the significant impact an individual can have when it comes to on-farm adoption of research outcomes,” he said.

“Mark is an example of someone who, through his expertise and involvement with industry, has had a huge impact on adoption levels.

“He has been highly successful in his farming systems work by being involved from the research end, right through to on-farm adoption – immersing himself in the farming community and understanding the issues growers face on the ground.

“Mark has also significantly contributed to the broader grains industry through his mentoring of young agronomists.”

Mr Roberts said the growth of the field pea industry in WA in the early 2000s was in no small way due to Mr Seymour’s understanding of the gaps in knowledge about varieties and agronomy and working to resolve these.

“For example, the field pea variety Kaspa  – formerly known as KA 4 – was trialled extensively in WA thanks largely to Mark’s persistence,” he said.

“The rest is history, with this variety now being the parent of all high yielding Kaspa -type field peas grown throughout Australia.”

“In this project, Mark works with other researchers and industry to help increase canola adoption in this State, in particular,” Mr Roberts said.

“Through an improved understanding of seeding rates and nitrogen timing, WA growers are now much more confident in using low seeding rates for canola, which is especially important when more expensive seed is used.

“Through his work, Mark provides support, significant leadership and input into crop production research and development conducted by DPIRD to help achieve the outcomes growers expect from investments by GRDC and the State Government.”

Mr Seymour first started with the then Department of Agriculture (now DPIRD) as a technical officer in 1987, working with Wal Anderson in the wheat program in South Perth.

Since then he has built strong research and extension experience in canola, field pea, lupin and other minor legume crops and has worked on engineering solutions in paddock preparation and harvesting techniques.

Since 2008, Mr Seymour has led and contributed to a variety of projects, including: research into tactical break crop agronomy; increasing the profitability of cropping systems in WA using lupin, oats, oilseeds and pulses; refining variety and management recommendations to improve productivity; and resource use efficiency of dual-purpose crops in Australia; putting the focus on break crops and pastures; and hybrid canola nitrogen management in low rainfall Mallee areas.