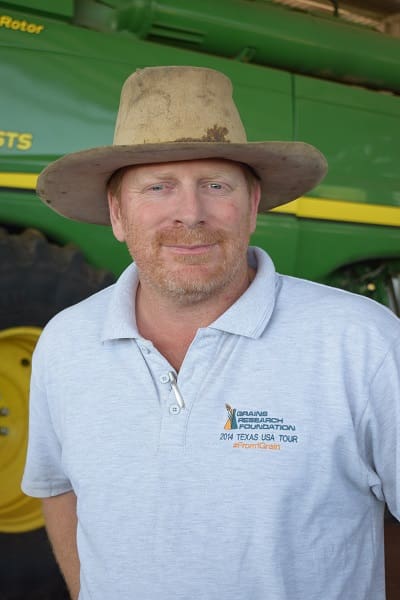 Mr Taylor, a 42-year-old third generation farmer from Warra, takes over from Dalby producer Wayne Newton, who is stepping down after serving on the AgForce Grains Board since 1999 and as president since 2010.

The changeover will take effect after AgForce’s annual general meeting on 20 November 2018.

Mr Taylor has been on the AgForce Grains Board since 2016, a director of the Grains Research Foundation Board since 2013 and has been managing his family’s grain farming business for more than a decade.

“Being born and bred on the land, growing grain is something that I truly love. I am a passionate advocate for the current and next generation of Queensland grain producers, and I am honoured to be elected AgForce Grains president,” Mr Taylor said.

“I am a strong believer in using communication and technology to drive improved productivity, profitability and sustainability on our farms and also to tell our story to consumers about what we do and why. The recent spotlight on glyphosate shows just how important this is.

“I’m also acutely aware of the impact the weather and accurate forecasting has on agribusinesses. While some areas have received some welcome rain in the past week, the drought is having a huge impact on grains producers and I am eager to highlight the importance of ensuring assistance measures work for all farm commodities.

“I’d also like to see the Queensland Government follow the lead of other states and abolish stamp duty on multi-peril crop insurance as soon as possible.

“Transport will be another priority, in particular addressing first and last mile issues for agriculture, making better use of up country bulk handling facilities and improving road conditions. I echo the sentiments of Victorian Farmers’ Federation Grains president Ross Johns who noted recently that ‘if trucks need to be roadworthy, then roads ought to be truck worthy too’.”

Mr Taylor is a keen social media user who Tweets under the handle @Warraboy and is heavily involved with #agchatoz, an online community for rural Australians to engage with people living in the cities.