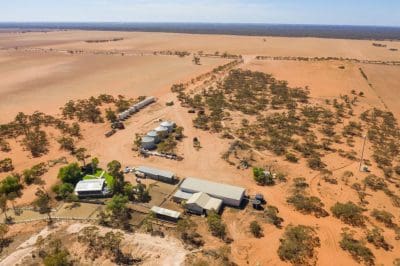 Selling at roughly $740-$865 per hectare, depending on rainfall and improvements, it is being seen by growers from the tightly held Wimmera as good value for expanding farming operations.

While its annual average rainfall of 250-280 millimetres is well below the Wimmera’s 350-400mm, cropping land is selling for around 20-25 per cent of the price.

And with barley, wheat and pulse varieties, as well as farming practices, available to suit the drier climate, one could argue the land is very good value indeed.

Elders Mildura agent Marty Deacon said this region, which includes the Millewa district west of Mildura, was yet to see the ripple effect that had lifted prices in cropping districts to the south.

“All the southern prices have gone up 20 per cent in the past three to five years, and farmers there are now doing their sums and seeing there’s nowhere else in Victoria that you can buy for $300-$350 an acre.”

Mr Deacon said some locals were expanding, but southerners were the ones who were putting upside into the market.

“It’s only been in the past six months we’ve seen farms sell to southerners for more than the locals are prepared to pay.”

Mr Deacon said a few relocating or investing NSW and central Victorian farmers had bought into the district, but most were coming from western Victoria, anywhere from Hamilton in the south to Ouyen in the north.

“The input costs are low here and some of the farms here have produced crops on less than 100mm of rain.

“It shows that farming practices are good, and it’s putting Millewa on the map.

“There’s a ripple effect of prices rising from the south to north.”

A number of properties are publicly for sale in the Millewa district, and include the First National Collie & Tierney listing from vendor Greg McSwain.

Known as Mocka 3, the well-improved holding at Merbein South covers 3724ha of flat to undulating deep red sandy loam with a small amount of native vegetation.

The property is expected to fetch more than $800/ha without plant, or more than $4.6 million in total with plant included.

Its improvements include very good fencing and stock and domestic water supply, stockyards, silos, a weighbridge and machinery sheds as well as a shearing shed and an impressive residence.

Average yields for wheat and barley sit at around 2.5t/ha, with more than 3t/ha achievable in bumper years.

“People from down Horsham way are showing interest in this kind of country,” Mr Stephens said.

Mr Stephens said the most affordable of the dryland farming country near Mildura was selling for around one-tenth of the cost of farmland in the high-yielding southern Wimmera.

Elders Mildura has Carinya at Meringur listed for sale by expressions of interest closing 31 March, and Mr Deacon said it was also attracting inquiry from the south.

Held by the same family for 95 years, the 1083ha holding sits 90 kilometres west of Mildura.

It features undulating and elevated red loam soils with a solid history of growing wheat, peas and lentils and running cattle and sheep.

Improvements include a homestead and separate bungalow and open-front machinery shed and miscellaneous shedding.

Mr Deacon said Carinya offered an opportunity to purchase an add-on block, set up the next generation in a family farming partnership, or establish a base from which to expand in coming years.