Boolah Farms can store around 170,000t of grain in total at its sites including Belahna, 50km north of Moree. Photo: Boolah Farms

AN INVESTMENT vehicle has emerged on the plains of north-west New South Wales which is offering passive landholders an alternative to leasing, share-farming and contracted management.

Known as co-farming, it is already in operation in the Moree, Gunnedah and Bellata regions as a joint venture managed by Boolah Farms, and this year is cropping around 26,500 hectares of land valued at close to $350 million.

Boolah Farms has already consolidated participating landholders into a co-farming joint venture where operating inputs and outputs are shared on a percentage basis.

After kicking off in 2020, Boolah Farms director Stuart Tighe said the model is looking to expand across a wider geographical area to spread the seasonal risk that is part and parcel of cropping.

“It’s about minimising the risk through geographical spread, and giving mid-sized passive landholders access to the benefits,” Mr Tighe said.

Boolah Farms’ co-farming operation currently involves nine landholding entities, and Mr Tighe said it is looking to expand its cropping area to take in country in Victoria, South Australia and the southern half of New South Wales.

“That could involve land owned by investors from non-farming backgrounds, or farmers who are sick of swatting flies and throwing spanners, but don’t want to give up their investment in agricultural land.”

Mr Tighe said Boolah Farms was keen to crop land with proximity to sizeable premium domestic markets or export pathways that could reward growers for provenance, quality and sustainable production.

Under CEO Sam Conway, Boolah Farms currently operates in three hubs, each with a farm manager, machinery, and employee group.

“We have a great team of 30 people that work in the business,” Mr Conway said.

The hubs can store around 170,000t of grain in total, and Boolah Farms carries out farm management, machinery contracting, grain handling and carbon management, as well as reporting services for the co-farming investors. 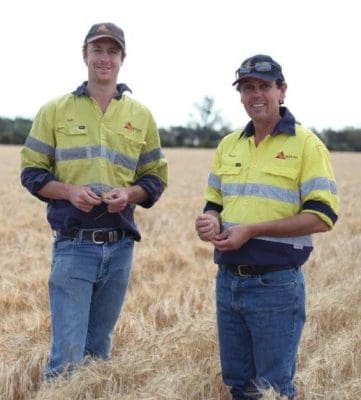 For streamlined management, Boolah Farms is using software from FarmSimple, a business based at Croppa Creek near Moree, to provide field data.

Another Australian software innovation, AgriDigital, is being used to track each load of grain and associated payments and documentation through the supply chain.

“Traceability back to the field is what it’s about.”

Mr Conway said the model was best suited to passive landowners with land and water assets valued at $10-$100 million.

“With today’s land prices, it is hard for the average-sized landholder to generate geographic spread or the other benefits of larger-scale farming.”

Subject to due diligence, an applicant property and its owner can be modelled into Boolah Farms’ operations, and be recommended to co-farm members.

“We recommend properties when they add strength to the model by providing a higher return, decreasing seasonal risk, complimenting an existing cell, or giving access to a new premium market.”

Less-productive agricultural land could also be considered for its potential to sequester carbon.

If more than 75 per cent of co-farm members vote to accept the applicant property, it will be admitted for a minimum of five years.

All other decisions are made by Boolah Farms management.

Building on more than 20 years of farming experience in the Moree district, Stuart and wife Lyndall Tighe have already proven themselves to be adept at servicing markets through a supply chain focused on Brisbane.

They are managing directors of Pure Grain, which connects growers of malting barley to Barrett Burston’s Pinkenba plant, and Mr Tighe said similar opportunities to supply discerning customers could well exist for Boolah Farms hubs in the south.

Boolah Farms currently works on a split of around 75pc of area sown to winter crop and 25pc to summer crops, a ratio which is likely to change as the Boolah Farms property footprint expands.

Mr Tighe said the co-farming model was developed following the 2017-19 drought in northern NSW, which showed up the need for geographical diversity.

“We were individually managing a number of different entities for country Lyndall and I were farming, for separate family groups, and for passive landholders,” Mr Tighe said.

“Each had their own P&Ls and operational requirements.”

Administratively and operationally it became difficult, especially as the farmed area more than doubled to 21,000ha between 2014 and 2016.

“We thought: ‘There’s got to be a better way of doing this’, and co-farming is what we came up with.”

Returns to landholders are based on the value of their property as a percentage of the entire portfolio’s value.

It means the impact of a failed season or crop on an individual property can be spread across the group.

The model was put to the test by heavy rain last spring on Boolah Farms’ Gunnedah operation, which covers 7500ha, and includes Milchengowrie.

“You name it, it flooded; a large portion of our Liverpool Plains crop went under water.”

Mr Tighe said the event caused widespread downgrading, but was offset by an earlier and mostly dry harvest in the Moree district to prove that geographical diversity, even within north-west NSW, could return a good dividend for multiple landowners.

While share-farming was the way for growers to build the capital to buy their own land in the days of regulated markets, Mr Tighe said the options of delivering and pricing grain in a free market have seen it lose its appeal for passive investors also.

“Share-farming is getting less popular because of the decentralised grain market.”

“Everyone used to take their grain to the local depot at harvest and get the same price for it; now with so much grain stored on farm, the price of it depends on when you sell it and who you sell it to; it’s a lot harder to define and split that income.”

Both leasing and custom management have therefore become more popular in the past 10-20 years.

However, lease rates have come under pressure through rising land values.

These are pushing annual return on investment to landholders to below 3pc of land value in order to keep fees affordable for lessees.

This is down from 5pc plus in previous years, and passive investors in agricultural land do not have to look too hard to find other ways to earn more money as interest rates climb.

While custom management can deliver strong results for landowner and operator, Mr Tighe said its weakness was its exposure to adverse seasons when linked to a single site.