Among the pros is carbon farming’s potential to create an additional income stream not contingent on seasonal conditions or commodity prices, as those landholders hosting wind turbines have already found out.

“This is clearly an attractive proposition in an industry with often highly variable returns from one year to the next,” Mr Altschwager said.

He said carbon farming also provides the opportunity for the sector to achieve net zero emissions, in line with Meat & Livestock Australia’s 2030 target and the National Farmers’ Federation’s one for 2050.

“There will, inevitably, be increasing pressure on individual farm operations to achieve net zero.”

Mr Altschweger said farmers can achieve this by reducing their existing emissions through strategies including the use of electric tractors and renewable energy, reducing methane emissions, and offsetting unavoidable emissions.

However, he said there have been very few transactions of properties with carbon projects in place, and those that have occurred have been difficult to analyse because of limited transparency on the terms of the carbon project.

The additional income stream from carbon farming is seen as likely to provide significant appeal to potential purchasers, which is expected to stimulate demand and put upward pressure on values.

“In some instances, there may be direct productivity enhancements as a result of the carbon project,  for example soil carbon sequestration.

“Further, the additional income allows for an indirect productivity increase through reinvestment in the farm for example new fencing, watering points, pastures, etc.

Mr Altschweger said there are often negative trade-offs as a result of these carbon projects, with HIR and Avoided Deforestation, which have been the most popular project types to date, are particularly inherent of reducing the productive potential of the property, even where the project only impacts a portion of the farm. (Table 1.)

These projects also require long-term commitments from the landowner spanning 25 to 100 years, and with ongoing obligations in relation to vegetation management, stocking capacity and bushfire prevention.

“Extreme weather events, including bushfire, can effectively place a pause on the income stream until regrowth has occurred to a level equivalent to the vegetation coverage pre-bushfire.

“This is likely to take numerous years to be achieved.

“Beyond the life of the project, State laws may then restrict any clearing of the land, with the landholder therefore unable to utilise the project land productively or re-establish the income stream with another carbon project.”

Carbon farming examples and what the future holds

Focusing on those projects which have proved most popular to date (HIR and avoided deforestation), the following case studies demonstrate the impact on farmland values to date.

“The net result on value will differ depending on the specifics of each project, including factors such as the breadth of the project area, impact on productivity and level of income received.

“In some cases, the income received may not be sufficient to offset the reduction in carrying capacity.” 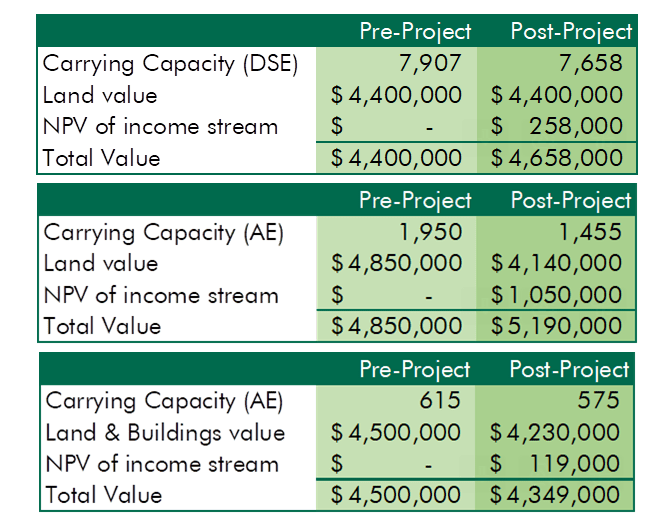 However, he said this was less likely to be the case with the expected increase in carbon price, as has already been experienced over the last 12 months.

In other cases the overall value may increase, but the underlying land value decreases as a result of reduced agricultural productivity, which can impact on borrowing capacity.

“While the gains from these case studies vary, carbon farming, in particular newer methods such as soil-carbon sequestration, is still very much in its infancy.”

“Only time will tell whether the increasing consumer demand for more sustainable projects and adapting government regulations in this area, will increase the appeal of carbon farming projects, driving demand for suitable properties, and therefore land values, to higher levels.”