ANTICIPATIONS of another near-record season and strong commodity prices are keeping the interest high for Western Australian cropping properties.

Demand is continuing for both add-on blocks and standalone properties, with WA family farmers leading the way in purchasing land, often within weeks of the listing coming to market.

An unnamed corporate investor is offloading the 22,568ha cropping property, Daisy Downs, located at Nunierra about 120km from Geraldton.

“It is on the edge of the farming country…and the last two years have been amazing up there,” Mr Wilding said.

He said the non-arable portion of the property would be suitable for a carbon project. 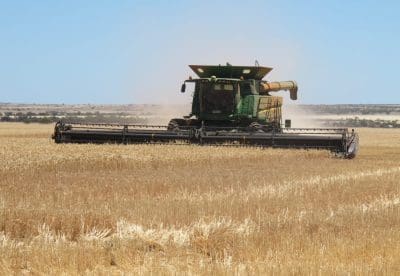 “I am talking to groups who are interested in the property for a carbon opportunity.”

Mr Wilding said if the current high level of demand continues, he expected strong interest for the large-scale operation.

“It has been an extremely active season for us; we have been very busy, and everything has been creating good interest.

“Neighbours are all looking to expand…there is still lots of demand and lots of activity in the market.”

It comes with extensive infrastructure, including numerous silos, a workshop and fertiliser, storage, chemical and general-purpose sheds.

He said the property would suit another corporate investor or an extended family operator.

It has a strong cropping history reliability producing wheat, canola and lupins, and can also accommodate sheep.

Beria is listed for sale at a price point of $6.95 million.

Mr Cheetham said there has been good early interest in the property, which has been excellently managed for decades by the one family.

“They are a very well-regarded farming family…and would have been one of the first families in that particular area,” Mr Cheetham said.

He said in addition to a reliable 350mm annual rainfall, Beria has access to water via a scheme connection, rainwater storage and 31 dams.

The property also comes with extensive infrastructure, including 1600 tonnes of grain storage, multiple sheds, a workshop and sheep yards. The purchaser of Beria has the option to separately acquire plant and equipment currently used on the farm. Photo: Peter Sippe

Mr Cheetham said he was yet to see a slowdown in the WA market, with demand still out-stripping supply.

He said this is clear by the number of inquiries for Beria and other WA listings.

“Farmers in [the Beria] area and most of WA are having a very good harvest.

“There is definitely still an appetite for people to buy.

“Farms like this are getting interest from local farmers as well as people wanting to relocate or operate it separately from their other farm in another district.

“We do get some inquiries from other states because they do see WA as being good value for its production potential.”

“Buyers have been reasonably aggressive for quite some time.

“They will often put in offers fairly early and strong offers with often very few conditions; it is quite quick-moving.

“Often when people are harvesting, that becomes their focus and there is less coming on the market and sales are put on hold a little bit until after harvest.

“But at the moment, as soon as something comes up, people are giving it their full attention and making a move.” South of Beria, another farming family is selling a cropping operation, Coombrae Aggregation, east of the Hyden township.

Elders Real Estate Narrogin agent Jeff Douglas said the aggregation was an amalgamation of four individual farms, the oldest dating back to 1928.

He said the owners have worked hard to transform the property into a highly productive cropping operation.

“After a prolonged period of running predominantly a sheep-grazing enterprise, the family has made the move into mainly cropping over the past several years with quite outstanding results,” Mr Douglas said in a statement.

“As is often the case in the eastern Wheatbelt, the owners have managed to grow substantial yielding crops with relatively low inputs, thereby generating higher profits.

“Several paddocks have been established to legume crops, potentially providing a boost to 2023 cereal crops as well.

“Sheep continue to be grazed on parts of the property, with pastures receiving fertiliser applications and several paddocks recently spray-topped ready for next year.”

“The property is one of the best examples [I have] brought to market in recent years and offers the corporate or larger private buyer the chance to pick up a significant landholding in one transaction and gain a commercial foothold in the area.”