Families, corporates up the ante on West Australian cropping country 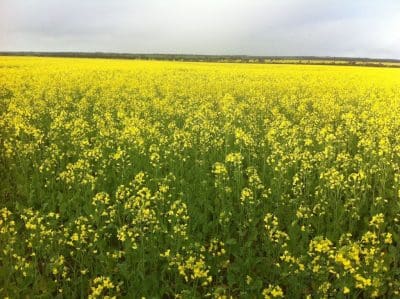 Canola growing on the 11,281ha Westonia property Yerbillon Park, a Harcourts listing with a price tag of $7.65m, or $678/ha, in the Merredin region.

“When it comes to expressions of interest on large-scale farms, we find the corporates are leading the charge, and that’s probably adding 10-15pc to the existing market.”

Among the investors building portfolios in Western Australia are US-based global investor Westchester, Macquarie Bank’s Lawson Grains, and KLK Farms, a Malaysian-owned family business has which owned WA farming country since the 1970s.

Warrakiri, which manages funds for institutional investors and owns 77,000ha in total of cropping country in Victoria, NSW, Queensland and WA, is also expanding.

The WA farming districts most sought-after in WA are between Perth and Geraldton, including Moora, where land has traded at up to $5000/ha and Dandaragan at $4000-$5000/ha.

“Location is everything, and the corporates want to be seen to be there.

“Esperance is one of the highest-producing regions, and that’s getting up there in value, especially if the farms are 50-100km from port.”

From mining to farming

“With the mining downturn, we are seeing some people in their mid-20s coming back to the farm, and the family looking to expand.”

Mr Norrish said well-improved properties which were working to farm plans, and had extensive data which provided paddock history, could expect to get 10-15pc above market value.

“That adds wealth to the farm, particularly for corporates.”

Mr Norrish said the price of cropping country may well flatten out as investors and family farming operations consolidated their interests in this period of lacklustre cereal prices.

“There’s a feeling of consolidation in the air. It was a big year last year for large-scale farm sales.

“We’re looking for listings now. For corporates, they want a minimum property size of around 3,200ha if they are buying into an area, but less if they’re amalgamating.”

Mr Norrish said corporates have also dropped their minimum rainfall requirement to 300mm from 350mm in a bid to secure area.

“Previously, the corporates have focused on more reliable rainfall, but in the past year, we’ve seen them move into more eastern areas, and that’s because of price and availability,” Mr Cheetham said.

“The prices are certainly stronger than they have been over the past three years; they’re up by about 20pc.”

Mr Cheetham said corporate buyers, as well as family farming units expanding their operations, were behind the rise in values for cropping land which could reliably produce 1.5-2t/ha of wheat.

“We’re also getting family farmers from NSW and South Australia relocating here because they see it as better value if they want a bigger area.”

Elders sales executive, Malcolm French, said values for prime WA cropping land had not appreciated to the same degree as they have in eastern states.

Mr French points to Yathroo, an 11,746ha property at Dandaragan in the 600mm rainfall zone between Perth and Geraldton, which sold recently for $3,950/ha to the Stoneys, a WA farming family.

“It’s every bit as good as Wallendbeen country, and produces fives tonnes of wheat per hectare. It’s very good value.”

Wallendbeen, on the southwest slopes of NSW, is one of eastern Australia’s dress-circle cropping locations.

Mr French said WA’s highest-value broadacre cropping land was to be found at New Norcia, closer to Perth, and had made $6,600/ha for prime export hay-producing country.

“That’s an improved value on what it would have made a few years ago,” Mr French said.

He said cropping land values had a close correlation to prices being paid for crops — cereals, canola and hay — and were underpinned by the quality of on-farm improvements, and proximity to ports.

“Our infrastructure here in WA is very good, and if you can take a load of grain to the port, and bring back a load of lime or fertiliser, that adds to the attractiveness of the operation.”