What crop on former owner Shenhua’s Watermark property near Gunnedah

Faulkner Farming is managed by Gunn Agri Partners, an Australian-based agricultural asset manager with more than $450 million in AUM and commitments, is the manager of the Platform that invests in regenerating mixed farms and developing natural capital assets across Eastern and Western areas of Australia.

Beef Central first wrote about the Shenhua transaction in this article back in January. The corporate entities – buyers, CEFC and Kempen SDG Farmland Fund, and manager Gunn Agri – were not identified at the time.

The Liverpool Plains property aggregation near Gunnedah in Northern NSW was part of the Watermark portfolio sold late last year that resulted in farms returning to ten local farming families and the investment now operated by Faulkner Farming.

The sale followed an agreement between the NSW Government and Shenhua Watermark Coal where it returned its exploration license and withdrew its coal mining license for the site. The process enabled the property to be returned to agricultural use and created koala habitat conservation sites now managed by the NSW LLS. 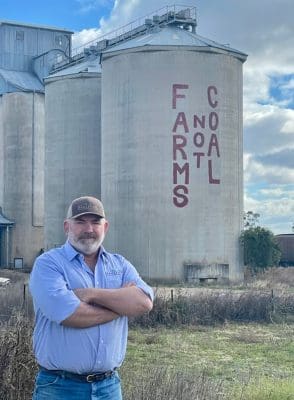 Faulkner Farming’s regional manager, Matthew Tonkin, said integrating regenerative farming practices and management of the ecologically significant areas on its farms was at the frontier of corporate agriculture in Australia.

“We take a long-term view on how we manage the landscape including the natural ecosystems. This means we manage holistically to achieve our goals, integrating cropping, grazing and the conservation of areas of land on our properties,” he said.

The Liverpool Plains aggregation was a prime example of the execution of this strategy. Of the 6000ha involved in the deal, there is some existing cropping on fertile black and red soils, as well as significant transformation potential of areas previously underutilised as unimproved pasture, as well as dedicated environmental conservation areas.

“We realign the use to reflect the potential of the land, improving productivity using regenerative agricultural practices and delivering biodiversity, soil and vegetation carbon sequestration,” Mr Tonkin said.

Faulkner Farming is now recruiting for staff to manage its expanded cropping area.

“We have great opportunities for people to work with us who want a career in regenerative farming. People aren’t just important in our business, they are the most important part of our business,” Mr Tonkin said.

The final transactions have now settled in the sale of Liverpool Plains land once owned by Shenhua Watermark Coal, with the CEFC and Kempen’s Transforming Farming Platform, managed by Faulkner Farming, joining local owners in dividing up the 17,160ha site.

Reported earlier on Beef Central, CBRE has now confirmed that 1208ha of farming land at Tambar Springs and 1114ha of land at Barraba were sold to the local Hockings, Cameron, Bomford and Oxford families.

As reported above, of the 14,835ha of Shenhua land near Breeza, Faulkner Farming  now manages 6000ha.

“There were five corporate investors with genuine interest to purchase all of the Breeza parcel,” Mr Goodfellow said.

“They each appreciated how difficult it can be to build such large aggregations, had the capacity to purchase all of the land and clearly each wanted the whole of the Breeza aggregation for themselves. However, one of those corporations ultimately decided to accept purchasing just some of the land at Breeza, primarily to allow the balance of the land to be split up and sold in smaller parcels to local families.”

“Shenhua agreed that it would be best for the local community to be able to at least purchase some of the land that they had fought tirelessly to preserve, as long as they paid the market price, which they did.

“Shenhua, CBRE and the local community are all grateful for the compassion shown by Gunn Agri to accept not taking the whole of the Breeza aggregation on the basis that other families wanted to acquire some of the land.”

The remainder of the Breeza parcel, totalling close to 9000ha, was split between the Warmoll family, which operates Jacks Creek Wagyu Beef, and the Pursehouse, Tudgey, Norman, Gibson, McDonald, Allison and Clift families – all locals looking to expand their existing operations.

“It was a somewhat challenging process with the COVID pandemic limiting some parties from participating in the sale process, and us ultimately having to delay the closing of the sale process to accommodate passionate people who needed more time to be able to travel,” CBRE’s James Auty said.

A total of 49 property inspections were conducted with interested parties, of which 45 submitted formal offers for the land, Mr Auty said.

“Something we will never forget is how many families arrived for an inspection with mum, dad and all the kids, because the kids now want to be farmers and the family needed more land.”

The Shenhua landholding initially comprised 24,130ha of land. As part of the deal between Shenhua and the NSW Government to retract the coal license, the government acquired 6975ha of land to be retained for native revegetation, for wildlife preservation and for indigenous cultural respect.

The time taken to ultimately settle on the last of the transactions was delayed extensively due to the requirements to firstly have surveyed and then registered all of the new land titles that needed to be created to separate the land being retained by the NSW government from the land to be operated by Faulkner Farming and the 12 new family owners.

“That title registration process has now been completed, so all transactions have settled. We are pleased with the result, and so is the local community and so is Gunn Agri. It’s been a great outcome,” Mr Goodfellow said.