VETERAN transport operators and mixed farmers, Paul and Jenny Fellows, are getting out of grain storage, with their Hay Grains facility coming to market this month and the Southern Riverina Grain Complex at Blighty currently under contract.

Both sites feature grain storage and handling facilities and equipment with the possibility of expansion.

Based in Deniliquin, the Fellows purchased the Hay and Blighty sites about six and 10 years ago to complement their already thriving transport business, Fellows Transport.

This business, which they ran for almost 25 years, has also recently been sold.

“The reason for purchasing those is that the cornerstone of any good transport business is to have your own work and to have a reason for being as much as anything,” Mr Fellows said.

“The transport and the grain storage worked beautifully together.”

Mr Fellows said it was the desire to move into semi-retirement that prompted the sale of both assets.

“We have worked really hard over the last 25 years with this business, and it was a case of wanting to wind it back and travel a bit and we have grandchildren now,” Mr Fellows said.

“[We have] kept a couple of trucks and we are building it up for our youngest son who wants to take in over in five or 10 years.”

Mr Fellows said the move will also allow him to focus on his advocacy work for the transport industry.

“Selling out has also given me more time to devote to other things.

“The transport industry has been really good to us over the years, and I quite enjoy giving back to the industry.”

The Hay Grains facility, located within the south-western NSW township, is up for sale via expressions of interest closing on August 30.

The 2.5-hectare site features 12,500 tonnes of storage and a near-new 120t-per-hour drive-over pit with horizontal grain-pump system, alongside a workshop, electronic weighbridge, and bulk fertiliser/ commodities and storage sheds.

Mr Horne said the Fellows made many improvements to the site, including the valuable addition of the grain-pump system which created more automated handling.

“Paul is big on improving assets and ensuring that they are very much OHS compliant,” Mr Horne said.

“He has really improved that site considerably since he bought it.” 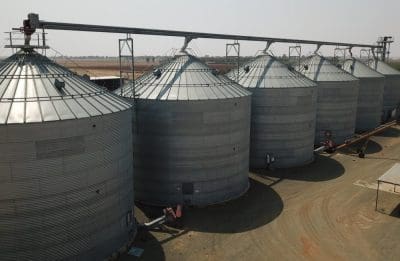 Mr Fellows said the Hay facility was currently running at full capacity, and will provide the new owner reliable business, as well as the opportunity to expand.

“We have made some good relationships with the farmers around Hay.

“The place is running to capacity and there is plenty of room for expansion.

Mr Horne said Hay Grains is being sold as a going concern with augers and running plant, grain-treatment, analysing and software equipment included in the transaction.

He said it is expected that the property will sell in the vicinity of $1.75 million.

“[The campaign] has kicked off reasonably well; we have had a handful of early inquiries.”

Mr Horne said selling agribusinesses was not as straightforward compared to properties, with a particular type of customer purchasing these facilities.

“Generally, it is a bit of a slow burn; there is either someone waiting there who wants one, or you have to try and line it up a bit to an existing transport or grain merchant.

“There never seems to be an abundance of buyers for these sorts of things.” Located 32km east of Deniliquin, the Southern Riverina Grain Complex features 7058t of storage, drive-over pit with auger connection to the shed, and diverter to the silos or garner bins.

Modern facilities include a site office, weighbridge and chemical-storage shed.

Fanmac Logistics purchased the facility in October last year and, while the company have taken over the site, the property is still considered under contract.

Mr Fellows said he has had good feedback from the new owners.

“It is going really well for them, and they are good people.

“It is always nice to know when someone does take your business over that they are happy with the purchase, and everything is how you described it would be.”

Alongside his roles within the transport industry, Mr and Mrs Fellows will continue to run their 400ha mixed-farming property which runs cattle and calves.