AFTER starting with just a 2000-hectare block, Kevin and Raelene Heidrich built up their mixed property, Mallee View, located in the South Australia Mallee, into a mammoth 10,600ha production powerhouse.

However, following about 30 years at the property, Heidrich’s say it is the right time to sell their prized asset.

It is situated in the locality of Copeville in the centre of the Murray-Mallee region.

Seeing the benefits of expansion, the couple incrementally purchased adjacent blocks when they became available.

“We kept on buying neighbour’s blocks as they came up…and we kept tacking on and tacking on more land,” Mr Heidrich said. 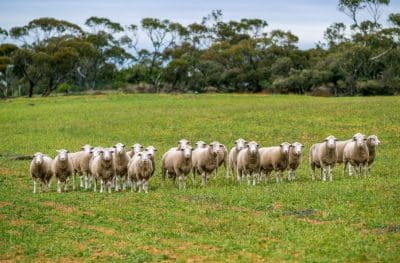 The new owner has the opportunity to increase the flock size. Photo: Elders Real Estate

“Raelene and I did it all on our own; this is a first-generation property.”

It has a strong history of producing a variety of crops, including wheat, barley, canola and lupins, with about 7000ha under cultivation.

The Heidrichs also run sheep, with about 4000 ewes with lambs currently on the property.

Mr Heidrich said the new owner has the option to expand this capacity.

There is also a large amount of infrastructure across the five properties, including 27 silos, multiple storage, shearing and machinery sheds, sheep yards and workshop spaces.

Well known for adopting new technology and practices, the Heidrichs have worked hard to develop the aggregation’s yield potential.

“I don’t want to brag, but we started everything new in the area. Mr Heidrich said while it is a “reluctant sale”, the time is right for the couple to sell up.

“If the number is right, I don’t think it will hurt me as much leaving the place.”

He said the uncertainty around a mineral sand mine located in the vicinity of the property was one of the main reasons why the couple wanted to move on, as well as none of their four children wanting to take on the operation.

He said they are currently building a house to have a break and consider their next move.

He said one of his children has an interest in sheep farming and they plan to help him buy a property when the time is right.

“I’m at an age where I can sit back and take it easy, but I will be buying farms because the son still wants to farm.”

Mallee View is being offered via expressions of interest closing on Friday, September 30.

There is an option to purchase the 2022 season crop as part of the transaction.