INVESTORS and family-farming operations are expected to lodge expressions of interest in the Elmore Cropping Portfolio which covers 6500 hectares of prime freehold and leased arable country in North-Central Victoria. 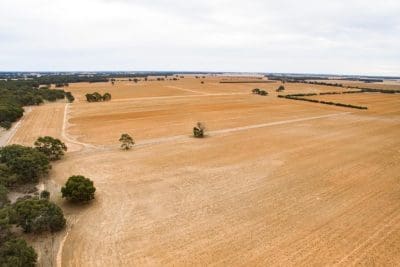 The Elmore Cropping Portfolio is being offered for sale by the Jenharwill Baling partnership through CBRE Agribusiness.

Listed exclusively with CBRE Agribusiness, the aggregation is being offered by Jenharwill Baling, a locally based partnership which started more than 30 years ago and has become one of Australia’s leading producers of hay.

CBRE agent, Peter Ryan, said the holding was being offered to allow the vendors to move on to the next chapter in their lives, and presented an usually large parcel of high-quality cropping land to the market.

“We are seeing some institutional money coming into the area because people are wanting to buy into cropping country with more reliable rainfall, more production options and lower handling costs than some places up north offer,” Mr Ryan said.

“We’ve got significant players building footprints in the region, and we’ve got some young guns coming back to the family farm and generational change happening.

“This Elmore portfolio will be attractive to all those people in the market.”

The aggregation has an annual average rainfall of 450 millimetres, and has traditionally grown oaten hay for export, as well as wheat, barley, canola and lentils, in addition to turning off up to 10,000 prime lambs grown out after the winter-crop harvest.

Elmore Cropping Portfolio is being offered on a walk-in walk-out basis with its modern and well-maintained plant and equipment, hay sheds and silos, as well as crops which have been kicked along by 30-50mm of rain in the past month.

Its freehold area consists of two well-developed semi-contiguous properties covering 3203ha in total, and the remaining 3297ha is made up of rolling leases within this tightly held cropping district.

“It’s a well-run and well-managed farm with a long-serving staff that can form a valuable nucleus for the next owner.”

“Those values have been escalating over the past two or three years because the region’s had a rebirth in cropping interest made possible by changing practices.”

Jenharwill is also a significant supplier to the domestic hay and grain market, and has sold much of its 2017 production into drought-affected areas of New South Wales And Queensland.