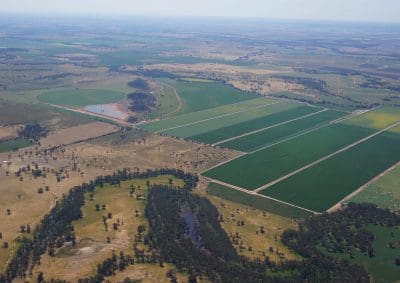 The Island at Condobolin is for sale by expressions of interest. Photo: CBRE

A PARCEL of prime irrigated and dryland Lachlan Valley cropping country is for sale with The Island, which offers attractive winter and summer-cropping options, and potential for further development.

Covering 1428 hectares, The Island is 28 kilometres east of Condobolin in central New South Wales, and its grey alluvial and red soils are reliable producers of wheat, barley, canola and cotton, with lucerne hay another option.

The CBRE Agribusiness listing is being sold on behalf of vendor Sean Duggan of The Laurels, Woodstock, NSW, to allow him to concentrate on other business interests.

“While not planted yet, 114ha of cotton is planned and would be part of sale if that fitted with settlement plans,” CBRE Agribusiness director Ian Robertson said.

The Island fronts the South Forbes Road, and its nearest gins are located 176km downstream at Hillston, and 145km north at Trangie. The Island at Condobolin has grown cotton in recent years. Photo: CBRE

The property’s layout comprises 670ha in total under centre-pivot and lateral irrigators, and 77ha of border-check flood irrigation.

As well as 182ha of dryland farming country, The Island has an additional 334ha of alluvial river flats which could be developed for irrigation.

The Condobolin district receives an annual average rainfall of 458 millimetres,

The Island’s entitlements include 1426 megalitres of groundwater and 700mL of Lachlan River General Security water, and The Island’s on-farm storage can hold 700mL.

Expressions of interest in The Island close on 21 November.