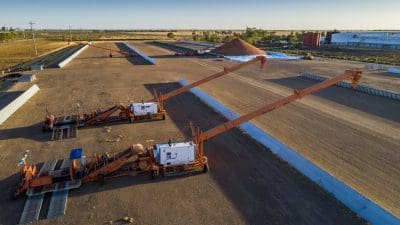 Its Moree site has listed this week with Colliers International, and is for sale by expressions of interest which close on 24 April.

Its Narrabri site, which has vertical storage for 11,000t, is believed to have sold to Arrow Commodities last year.

The sites are being sold as LDC, one of Australia’s major cotton ginners, separates its grain and cotton operations by divesting its grain infrastructure.

A recently built Kotzur-designed vertical storage complex has given the storage three 650t silos plus a 43t garner bin with an estimate outloading capacity of 650t per hour. 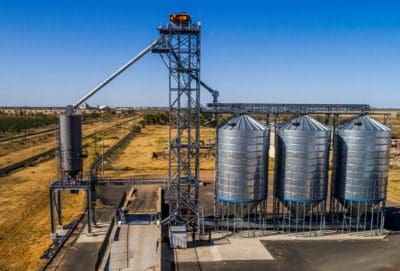 The garner bin has three sections, which enable batches to be segregated and loaded for road freight, or into rail wagons on its 850m siding.

The existing rail line links it to Newcastle, 425km to its south, where LDC owns a stake in the Newcastle Agri Terminal, and the site will be connected directly with Brisbane and Melbourne once the Inland Rail line now under construction is completed.

LDC’s Moree site is close to the Newell Highway, and 7km south of the town.

Moree is traditionally one of Australia’s producing areas for Prime Hard wheat, and is also a key accumulation point for cottonseed, barley, sorghum and chickpeas.

Following a bumper winter-crop in 2016, the region has had disappointing seasons since, and is now playing an important role in accumulating and out-turning grain for the domestic market.

This is arriving by road and rail to supply feedlots and other end users, with Arrow one of the main trading companies involved in filling the production shortfall in northwest NSW.

Trade sources said Arrow was currently leasing the LDC Grains Moree sites and, as with its Narrabri site, was using it to store sorghum.

LDC is Netherlands-based, and has been a trader of commodities, including grain, meat and cotton, in Australia since 1913.

It purchased Dunavant Australia’s cotton operations in 2010, and is expected to continue operating its gin at Moree next door to the LDC Grain site, as well as its gins at Dalby and Emerald in Queensland.

Other major bulk-handling grain storages in northwestern NSW outside the GrainCorp network include Austgrains, CHS Broadbent and the Manildra Group at Moree, and Viterra in Narrabri.