MACQUARIE’S Viridis Ag has kicked off its investment portfolio by purchasing The Grange at Dongara, south of Geraldton in Western Australia. 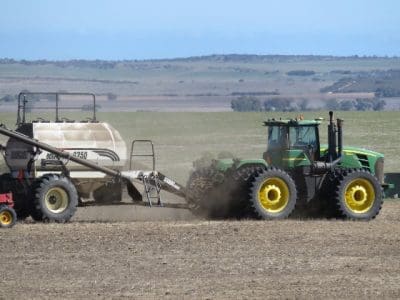 “This was the first farm for Viridis Ag, and it’s in line with our broad strategy to have a signif icant and diversified row-crop farming investment, dryland as well as irrigated,” Macquarie Infrastructure and Real Assets division director, and head of Crop Australia, Sean O’Reilly, told Grain Central.

Mr O’Reilly was unable to comment on The Grange’s price tag, rumoured to be $32 million, for the 16,500-hectare holding previously owned by Wellard chief executive Mauro Balzarini

“At Lawson Grains, we built a portfolio across climate zones and production regions and end markets, while every farm practices high level of precision agriculture,” Mr O’Reilly said.

“Those farms are spread by design and, similar to the Lawson Grains portfolio, we would look to be building that diversity in Viridis Ag.”

Lawson Grains owns and operates 10 cropping properties in total in NSW and WA.

Mr O’Reilly said suitability to establishing a sustainable rotation would be an important consideration for Viridis Ag when looking at properties to purchase.

He said crops including wheat, barley, canola, lupins, chickpeas and summer crops would feature in the Viridis Ag portfolio, which would not be restricted to any particular Australian states.

“Viridis Ag will be a cropping portfolio at this stage, not livestock.”

Mr O’Reilly was unable to divulge specifics about the nature of the Viridis Ag investment, saying the company was restricted by US Securities and Exchange Commission regulations while raising capital.

As with Lawson Grains, Mr O’Reilly said Viridis Ag would have a high level of focus on sustainable farm practices, including soil amelioration works, precision agriculture, and involvement with research projects and community.

While he would not be drawn on the lifespan of the company’s investment, he said agricultural investment horizons could range from 10-15 years to evergreen.

“We’re absolutely in it for the long haul.”

Viridis Ag will be Macquarie’s third agricultural company headquartered in regional NSW: it will share an Albury base with Lawson Grains, while Paraway Pastoral has its head office in Orange.