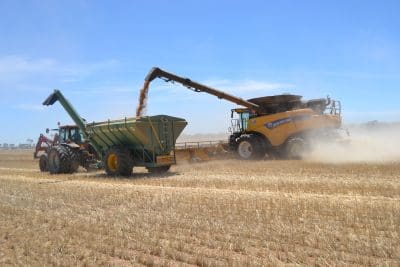 Harvest on Arkana, an aggregation in the northern Mallee now for sale. Photo: CBRE

THE Arkana Cropping Aggregation in Victoria’s northern Mallee region is being offered for sale by the Bridge family.

It was cleared for development in 1965 by the Bridge family, who has owned and operated the farm in the well-regarded cropping district ever since.

Located on Bridge Road, the property is 11 kilometres south-east of Pinnaroo in South Australia.

A total of 3965ha, or 94 per cent, of the land is arable, with the property underpinned by soil types including red brown loam and sandy loam over clay, and accompanied by areas of limestone.

The aggregation receives an average annual rainfall of 325-350 millimetres and features several improvements, including a family home, a four-stand shearing shed with adjoining sheep yards and an array of implement sheds and silos.

The Bridge family has appointed CBRE Agribusiness to offer the Arkana Cropping Aggregation for sale, with Phil Schell and Angus Bills inviting expressions of interest by March 12, 2020.

It is available for purchase in one line or as eight individual properties ranging in size from 259ha to 1358ha.

“Arkana has been a family-managed farm for more than 50 years in a renowned grain-growing region,” Mr Schell said.

“The aggregation offers impressive scale for investors and corporate buyers, and an opportunity for local buyers to purchase excellent cropping land in a tightly-held district.

“It features the characteristics of a highly-productive broadacre cropping platform, benefiting from scale, operational efficiency, fertile soils, idyllic climate and a desirable location near grain receival sites at Pinnaroo and Murrayville.”