NSW property sales tick over in midst of drought

DROUGHT in central and northern New South Wales has failed to deter neighbours and relocating family farming operations from buying mixed farming land as they look to invest in proven cropping and sheep country. 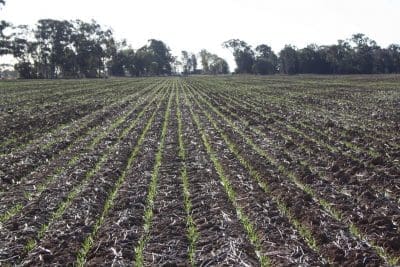 Last week, this was evidenced by the sale of Washington, a 590-hectare holding west of Dubbo and 30 kilometres south of Narromine, for $1.93 million, or $3260 per hectare, to a near neighbour.

Landmark Harcourts Warren agent, Ashley McGilchrist, said Washington was passed in at auction for $1.51m, but the sale was negotiated soon after.

Washington, with 558ha of wheat given in as part of the sale deal, has been one of the few listings in the northern half of NSW to be offered with crop in the ground.

Last month, Harcourts sold Ashmore, a 359ha cropping block with improvements at Collie, 50km north of Trangie, at auction to a neighbour for $1.17m, or $3259/ha.

“The whole central west is still pretty tightly held, and sometimes those smaller holdings get a bit of a premium from the neighbours,” Mr McGilchrist said.

Balgowan, a 1383-hectare mixed farming holding at Eumungerie north of Dubbo, was sold for $3.775 million at auction last month under the Ray White Rural hammer.

“What I’ve seen sold in the past month to six weeks shows no notable downturn in prices,” Mr McAneney said.

“We are still seeing good inquiry on properties, but we are not seeing a lot of people bringing properties to market.”

He said most of the buying interest was coming from expanding or relocating family farming operations.

“There’s still a solid market there, but we’re hoping for a wet spring, and we’re in discussion with a number of different people who are ready to list their properties, regardless of whether we get rain or not, next month.”

While the severity of the NSW drought has clouded the cropping outlook this year, Mr McAneney said buyers were taking a longer-term view on proven cropping country, and taking some solace in high sheep and wool prices.

He said cash flow in the first 12 months of owning a property was critical, but strength in the sheep market was helping to compensate for a reduced or non-existent winter-cropping income in 2018.

Balgowan sold to a farming family relocating from Mudgee, and its sale price equates to $2930/ha, in line with recent district sales.

The property features 1300 tonnes of vertical storage from 20 cone-bottom silos ranging in capacity from 16 tonnes to 75t, and its soils range from dark self-mulching to brown clay and red sandy loams.

The same 3 July auction which sold Balgowan saw the Nunkeri, Loch Lomond and Combogolong aggregation at Coonamble passed in. These properties remain on the market and are inviting expressions of interest through Ray White Rural Parkes.

Moree Real Estate has recently sold Glenoak prior to its scheduled auction date of 30 August.

Glenoak is located 6km east of the Newell Highway, and 54km south of Moree, and has 700ha developed for cultivation, with the balance being mostly lightly timbered grazing.

Likewise, the 614ha Grainswood North at Narromine was passed in at $1.4m, or $2280/ha, at the Landmark Harcourts Warren auction which last week sold Washington.