VALUES for farming country on the southwest slopes of New South Wales have undertaken a meteoric rise in the past 10 years, and it’s not over yet. 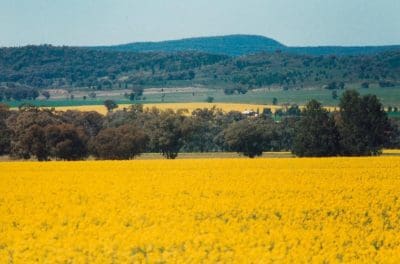 Cropping country in Grenfell on the southwest slopes of NSW is currently in hot demand.

Buoyed by the corporate footprints of Glencore and BFB, as well as expanding family operations, country between Young and Temora is in particularly hot demand.

Glencore accumulated most of its country between 2007 and 2012, and is now believed to own an aggregation of around 12,000 hectares.

BFB, in which Cargill’s Black River is a major shareholder, is believed to crop in excess of 40,000ha, as well as running some stock, and has purchased country into steeper slopes areas like Jugiong, east of Cootamundra, and plains country towards West Wyalong.

Farming districts like Bribbaree, Grenfell, Milvale and Quandialla, where Glencore Land (Australia) Pty Ltd has its headquarters, are favoured locations.

“And the closer you get to Young or Grenfell, the higher the price.”

Agents in the region said some parcels of red loam and heavier clay country in the past year or so had sold for $5000/ha, with spikes of more than $7500/ha.

“Prices have been flat for a few years, but they’ve increased in the past 12-18 months by around 30 per cent,” Mr McLaren said.

“That’s because there is demand for land from family farms that have developed into profitable and sustainable businesses, as well as corporates who want to expand or buy in.”

These are levels which were previously reserved for southern NSW’s 600mm-rainfall dress-circle farming country around Harden, Junee and Cootamundra.

The country has reliable rainfall, and averages roughly three tonnes/ha of APW or Hard-type wheat, with the potential to go to 5t/ha in bumper years.

It is also a proven area for canola, which enjoyed exceptional yields and oil content last year to help offset lacklustre cereal prices.

The region is also handy to domestic grain end-users including feedlots, piggeries, poultry farms and flour mills, and has the export option via Port Kembla, Geelong or Melbourne.

Other corporates have also staked a claim in recent years; they include Duxton Asset Management’s Wyalong Rural Investments, in the Bland Creek catchment south of Forbes, and Lawson Grains.

“Prices around Temora are now similar to those being paid around Edgeroi, Moree, North Star in northern NSW, and even the Darling Downs in southern Queensland.”

He said increased yields from better-performing varieties were boosting confidence in farming south of the Lachlan River.

“That Riverina slopes country has been undervalued compared with the good soils in northern NSW, where anything in that 550-650mm belt has been steadily climbing for years.”

Mr Gunning said corporates have bought into the southwest slopes as an affordable alternative to northern NSW, where land which had not already been absorbed by large holdings was hard to find.

“They could buy a lot of land for a third of the price it was costing to cost them further north, so they’ve amalgamated a lot of uneconomic-sized properties into large ones where they can justify the cost of machinery which allows them to farm with the latest techniques.”

“The general consensus is that from about July-August last year, prices jumped 25-30 per cent overnight. You’d think we were talking about the Sydney property market,” he said.

Mr Schneider said neighbour-to-neighbour sales, as well as demand from grazing and other farming areas as far afield as South Australia, had helped to fuel the price rise.

“It seems dear to us when you look at what that country was worth 10 or 20 years ago, but it’s good value to them.”