DEMAND from relocating and expanding family farming operations is lifting inquiry and demand for broadacre farming holdings in Victoria’s Northern Mallee, and the Murray/Mallee and Eyre Peninsula in South Australia, where the addition of pulses and canola is buoying farm earning  capacity in the face of depressed cereal values. 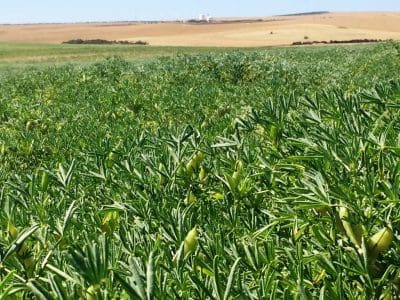 This South Australian property in the Eyre Peninsula’s Port Neill district was recently purchased by a farming family from the Yorke Peninsula.

Agents say the inclusion in recent years of crops like canola, chickpeas, lentils, lupins and vetch had all helped to make attractive these areas which have previously been considered too dry to reliably produce crops.

They say corporate interest in crunching numbers on Murray/Mallee properties in particular was evidence that confidence had grown in one of eastern Australia’s lowest-rainfall farming areas.

Much of the buying interest has come from producers in Victoria’s Northern Wimmera and Southern Mallee, and South Australia’s Mid North and Yorke Peninsula, all safe cropping areas and where local producers were finding it hard to expand due to a steady increase in land values and lack of acreage and availability.

“Corporates looking north of Ouyen are generally seeking a broadacre cropping area that will produce a 10,000t minimum grain crop, and ideally rainfall of more than 280-300mm.”

Mr Fernandez said he believed corporate interest was more visible in Victoria’s Wimmera and southern Mallee, in locations including the Birchip, Horsham, Hopetoun and Sea Lake districts, and Lameroo and Pinnaroo in South Australia.

While a shift out of mixed farming in northwest Victoria in the past 10-15 years may have some producers kicking themselves as livestock prices continue at record highs, Mr Fernandez said diversity in cropping and improved farming practices was yielding positive returns.

“Five or six years ago, we’d never seen canola or peas sown up here in far northwest Victoria. Since 2011, which was a very wet year, a lot of growers got started with canola in particular, and since then, have introduced chickpeas and vetch to their rotations.

“In this district, the larger producers are cropping upwards of 4,000-8,000ha, and doing more and more with rotations; that’s one of the biggest change we’ve seen in the past few years.”

Mr Fernandez said the switch away from cereal crops alone had created the kind of flexibility corporates, as well as relocating farming families, wanted to see when considering investing in Northern Mallee country.

“But it’s still a relatively tightly held area; of the three properties I’ve sold recently in the Ouyen/Murrayville region, two were due to winding up of estates and one was as part of a family’s succession planning.”

“There is not a large pipeline of broadacre properties on the market, and the ones that are on the market in some instance are there because the owners realise they need scale to continue, particularly with the introduction of rotations.”

“As for the far northwest corner of Victoria, most of the buyer enquiry is coming from within the local district, or from the Southern Mallee and Wimmera.” 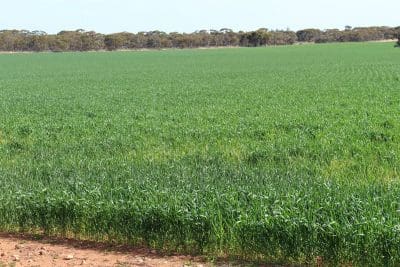 This 1265ha property at Underbool in the Victorian Mallee sold for $1,795/ha.

“Farmers talk about two seasons ago, when it was a relatively tough year, and most crops were yielding around 4-7 bags to the acre (0.8-1.5t/ha). Go back 20 or 30 years, and with similar seasonal conditions, they possible wouldn’t have put the header in.

“The Hard wheat and barley varieties around now, in addition to new farming practices which retain soil moisture, have all helped to improve yields in low-rainfall environments.”

“The Ouyen to Murrayville region is different. Generally, that district receives 15-25mm more rainfall annually, and the soil types can be overall slightly improved, with these properties realising mostly around the $1,350-$1,975/ha ($550-$800 per acre) price range.”

Mr Fernandez said primary producers in the Wimmera and Southern Mallee areas were now looking further north for cropping and grazing opportunities where they could invest in larger-scale, lower-input farming areas, and with the benefit of value-adding or risk-managing their existing holdings.

On the Eyre Peninsula (EP), Elders Port Lincoln agent, Darryn Johnston, said buyers were looking at soils for their suitability to lentils, a crop which struggles in saline or sodic soils.

“Locality is the key issue. Demand is specific to reliability of rainfall and soil type, and buyers want well-drained and pH-specific soils; lentils seem to be driving the market a bit,” Mr Johnston said.

He said the bulk of demand for EP properties was coming from South Australia’s Yorke Peninsula and Mid North, and also from locals looking to expand.

“What buyers are looking for is 1,200ha or upwards to get established.”

“There’s also country available in that middle range, and values for everything have definitely increased in the past three years; they are up one third in some cases, and they’ve doubled in others.”

Mr Johnston said pulses and canola had added a welcome line of diversity for export-dependent EP farmers, who on the region’s heaviest soils averaged 4-6t/ha of wheat.

He said the lower-rainfall northern EP could grow Hard 2 wheat at 2.5-3t/ha, and was also a reliable producer of malting barley.

“We have seen an increase in DSE values across the region, and we have seen cropping values going up too. We are getting so much demand from so many quarters.

“A lot of interest is coming from internationals and fund managers for properties on their own, and there are always the locals that want to upsize, or people that have sold out in other areas.”

Mr Watts said lupins were particularly well suited to the sandy and acid soils found in parts of the region, and lentils and faba beans were popular pulse crops in the wider region.

Depending on soil type and rainfall, Mr Watts said land values ranged from about $3,000-$7,400/ha, and wheat and barley yields averaged 4.5t/ha in the better country.

“Those prices are up 20pc in the past year or two after they hit a top in 2009-10 and then plateaued out because we had two dry springs and two dry summers.”

“Last year there were plenty of farms averaging 5.5-6.5t/ha, and getting malting grades of barley which we can often get.”

He said the region’s proximity to the coast meant it often achieved its annual average rainfall of 450-550mm, and rainfall records could challenge the perception from people outside South Australia that dry was a chronic problem.

“Even in the last drought we had 325mm, and our wet years might be 625-650mm; there isn’t as much rainfall variability here as some people might think.”

“We get the rain more times than we miss out.”