THE CONSOLIDATION of cotton as a cropping option for irrigators in southern NSW has doubled values for developed country as corporates and family farmers look to expand their operations on secure water entitlements. 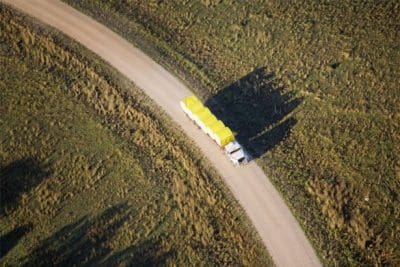 Bales of cotton hauled through grazing country on the Riverina.

“Three years ago, laser-levelled irrigation land would have sold for $2500 per hectare without water; that’s more like $5000/ha now,” Mr Owers said.

“Property is very scarce at the moment.  A lot has changed hands in the past couple of years to corporates and large family owners, and there’s virtually nothing of size hitting the market.”

“Even traditional smaller farms around Griffith and Coleambally are as scarce as hen’s teeth because large family operations are buying them on a whisper of selling.

“I’ve never known it to be like this in 40 years in the business.”

Mr Owers said the increased demand had also put a floor in water entitlement values at around $1500 per megalitre for general-security allocations, and $3500/Ml for high security.

This floor had been tested in recent months with full allocations and a very wet spring.

“It’s different to 2010, when there was lots of water around and prices dropped in a hole; they got to as low as $600/Ml for general-security water and $1,200 for high security.

“This year we’ve had an abundance of water and the values are still holding at close to triple what they were then, and it’s cotton that has been the big difference.

“Our cotton yields are every bit as good as northern NSW, and the quality is better.  We’ve now got four gins in the region, and cotton is a huge money-maker.”

“That’s why big farming companies are looking for land in the south,” Ms O’Callaghan said.

Cotton growers will traditionally sell cotton forward if the price exceeds $500 per bale, and with contracts available out to 2019 at more than $520/bale, Ms O’Callaghan said cotton areas were on the rise.

“The long-term average for allocations here is 60 per cent, and you can buy water more cheaply on the temporary market. That security of income from cotton is supporting land values because there’s no certain forward market for other crops.”

Southern Cotton operates one of four gins in southern NSW, and Ms O’Callaghan said the forecast was for a record area of around 60,000ha to be planted in 2017, up from 18,000ha in 2011 when the industry was kicking off in the region.

The building of Burrinjuck Dam brought the MIA into production in the 1920s. Rice, pastures, grapes and tree fruits have been its staple crops.

The region has also supported wool and prime lamb industries which are currently enjoying strong values, and making the dryland component of Riverina holdings attractive.

“Income from grazing with prime lambs and wool can’t get near crops, but the grazing land values are certainly way up from where were 10 years ago at $150/ha to more like $500/ha now,” Mr Owers said.

As large-scale Riverina holdings usually come with a sizeable dryland grazing component beyond the reaches of irrigation, this is adding to their appeal for corporates like Paraway Pastoral Company which focus on livestock production.

And while cotton is cribbing area from rice every year in the MIA, Ms O’Callaghan said the irrigated cereal still had its place.

“Rice you can sow to the end of November, something you can’t do with cotton, and some heavy clays are better suited to rice than cotton.”

Ms O’Callaghan said farmers and agronomists were seeing appeal in adding cotton to rotations which included rice and pasture, as cotton was a proven earner and disease break outside the grass-crop spectrum.

“People started to get into row crops like corn and silage, now you’re seeing people in horticulture going into cotton; it shows the diversity of the Riverina.”

“Some farmers are growing melons and vegetables and putting cotton into that rotation too.”