Extensive irrigation on Hortonvale, near Cunnamulla, has been used to grow forage crops for prime lamb prodcution, as well as wheat, sorghum, chickpeas, mung beans, hay and cotton.

There is potential to increase development of pivot irrigation areas to 2682ha.

Historically, the property has produced a range of conventional and organic crops including wheat, sorghum, chickpeas, mung beans, oaten hay and cotton. Lamb fattening on irrigated forage crop has also featured in the past.

CBRE Agribusiness is handling the marketing of the property, being offered by expressions of interest closing December 2. Vendors are well known Cunnamulla district wool and lamb producers, Geoff Dunsdon and family. 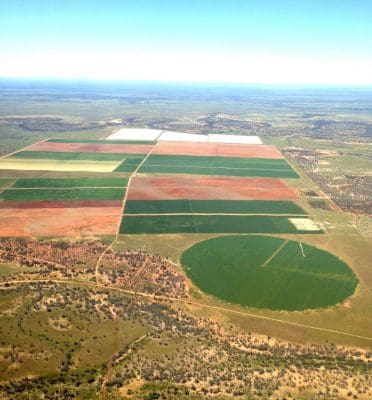 “Hortonvale will appeal to a range of industry participants, from graziers to farmers seeking production and geographic diversity with scale,” he said.

“This is highlighted from the historic cropping rotation and the ability to background prime lambs. Cropping has also exhibited high yielding crops.”

“The organic certification is also a key feature, with it enabling the property to be integrated within an organic supply chain and providing the ability to capture organic premiums,” Mr Thomas said.

The landholding, which benefits from dual frontage to the Mitchell Highway, also offers significant scope for expansion, with potential to increase water storage from 12,330 megalitres to 20,430 megalitres.