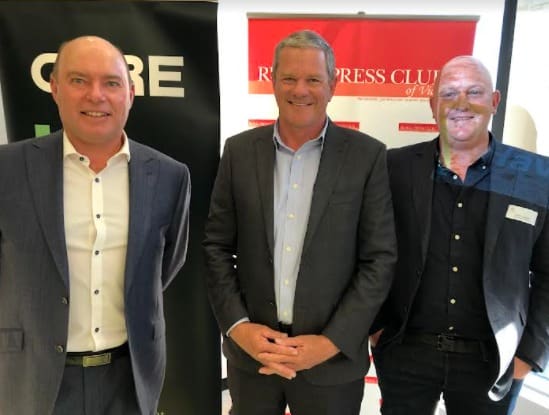 RURAL land values have not peaked yet according to speakers at a recent Rural Press Club of Victoria-Agribusiness Australia event in Melbourne.

The corporate investors were looking at boosting their ag portfolios for diversified returns, as an inflationary hedge and as an option to enter the carbon market.

The speakers predicted more upside in land values, especially for the livestock sectors, and despite inflationary pressures, as long as high commodity prices were sustained.

He said with corporates and financial institutions after the Global Financial Crisis, some superannuation funds mandated a minimum threshold of investments in real assets.

“The great thing about investing in farmland businesses is that the returns from farming are not correlated to the returns from the share market, the bond market or other forms of commercial property,” he said.

“It’s not inversely correlated, there is just no correlation.”

“So if you are a fund that really thrives on getting diversification, to have some agricultural investments in your portfolio adds a huge amount of value.”

Mr Goodfellow said a lot of sophisticated institutions have calculated that investing in ag is a very good commercial hedge against inflation.

“And with a lot of commentary around the world right now about the prospect of us going through an inflationary period, then to have some equity involved in agricultural returns is a pretty smart move.”

He said institutions are embracing new technologies and many are looking at what they need to do to get more involved in the carbon movement globally, with some making public carbon neutral-by-2030 commitments across their portfolios.

“Now not everyone knows how they are going to get there, but to buy some land and potentially have the opportunity to put some trees in seems to be the thing of the current discussion.”

Mr Goodfellow said over last 20 years year-on-year there has been an 8 per cent compound growth rate in farmland values.

“But over the last five years it has been about double the long-term rate of return in capital gain.

“And if we were to look at just the last two years, you might argue that that’s actually higher than 25pc and in some cases over 30pc – so it’s on a massive ramp up right now.”

But he said land value increases have not been universal across Australia. In cropping areas, there have been increase of value of over 20pc per annum year-on-year over the last five years.

He said since the end of the drought, land prices increase have been rampant, making cropping land at Wycheproof, Victoria, worth about $800 an acre in 2017, now valued at over $2000 an acre.

But Mr Goodfellow said in south-west Victoria’s dairy areas there had not been the same level of growth, because the dairy industry was going through a restructure due to global oversupply.

Land values have not grown to the same extent in the past five years in areas like north-west New South Wales and south-west Queensland’s cattle country due to the drought because it has taken farmers longer to rebuild balance sheets and have cash to compete against neighbours, he said.

Drought has also probably made corporates nervous about investing there.

Mr Goodfellow said after the drought, it has taken cattle producers up to 2.5 years to get cash in the bank, whereas croppers have done it in 12 months.

“So what we’ve seen in the market … is that cropping land has gone up in value so much faster than livestock land, because it is the croppers who have had access to capital, but now it is the livestock farmers’ turn.”

“Family farms need capital to buy that farm next door, they’ve now got that capital, but the big corporates haven’t turned away either.

“There is so much money still lined up looking for a home in our industry that it would blow you away, but probably one of the biggest drivers right now too is the supply and demand,” he said.

“Because families and corporates are actually doing pretty well in farming not many of them want to get out of farming do they?

“So there are not a lot of farms actually on the market right now for sale, so when they do come up there is just incredible competition for that limited supply.”

Mr Goodfellow said there is a very strong focus by investors on the yield of farms.

“$3900 is as much money as you would pay for land to grow a tonne of wheat on a reliable basis each year.”

Mr Goodfellow said the key themes in future land values were inflation, what is that going to mean to interest rates and what might happen with commodity prices (graph 1). 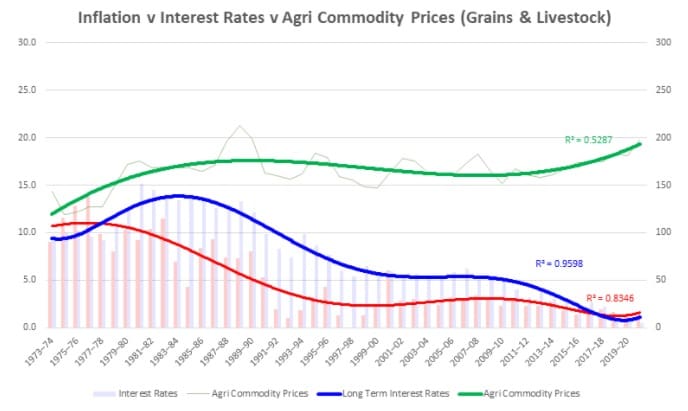 He said interest rates had peaked in the 80s at 18.5pc, but have been falling until recently, when the long-term interest rate started to rise, and there was clear evidence that inflation “is in front of us.”

But on the basis that big institutions have invested in agriculture as a hedge against inflation, that rising interest rates typically related to rising inflation and this had a relationship to rising commodity prices, “you would have to expect that the rural commodity prices should at least remain around the average that we have seen over the last 18 months,” Mr Goodfellow said.

“I’m not saying it is going to stay at today’s level, because it has been impacted by a couple of other things overseas, but we should be very confident that commodity prices will remain quite strong over the next three to five years at least.”

Is there room to move for buyers?

He said WAM has $2.3 billion in funds under management across five active investment strategies with 55 individual assets spanning half a million acres nationally.

It has a presence in most parts of Australia, with full owner-operator and partnership structures in dairy, broadacre cropping, horticulture, viticulture water and ag infrastructure.

“We’ve got to be really careful about generalising around strong capital growth across agriculture’s diverse sectors, regions and it’s not accurate to say that they are all in the same condition,” Mr Goonan said.

“There is about $700bn across a wide range of sectors nationally and the regions are so diverse and the sectors are so diverse, it’s not accurate to be able to generalise to say they are all in the same condition.”

In a seven- year period in the early 2000s, the portfolio had an annual growth of 10pc.

“More recently we’ve seen an 8pc rise in 10 years, about a 12pc rise in five and about a 15pc rise in the last three years nationally across the Warakirri portfolio.

“The southern region broadacre cropping zone has done about 10-14pc in the last 10 years, but northern region about 6-8pc and western region 4-5pc,” he said.

“But you still have Western Australian farmers bleeding that their cropping land has gone up at the moment when they have endured 4-5pc capital growth over a 10 year period.”

But he said despite the diversity of capital growth across the region as and commodity sectors “there is still value to be had.”

Mr Smith said he expected some upside yet in land values, but this would vary regionally, with some buyers moving to other areas seeking value.

“I think as well there is no doubt that interest rates have been part of this story and if we do see some rises, most pundits are talking of a rising rate environment for the next couple of years with some short term softening in terms of people being able to fund inputs – with fuel and fertiliser costs rising.

“That does impact on confidence and willingness to spend,” he said.

“Where we see it is, I don’t expect this will be a correction and it’s not an asset bubble … once we get to that catch up point it’s probably at a base that people will get used to.”

Mr Goodfellow said CBRE was noticing that farming families are adopting a corporate view on their businesses and “starting to think and behave like we’ve never seen.”

The new generation is doing all the spreadsheet and financial analysis work, but farmers are also thinking about succession and have to buy another farm to do this.

He suggested that the drought had disguised the impact of new technologies but good seasonal conditions had seen families look to buy land to take advantage of the technological advances.

“So we have this new wave of generation coming through in ag.”

Mr Goodfellow advised analysts to “keep an eye on the dairy industry, it hasn’t peaked yet, it’s got a long way to go, but in particular, generally the grazing industry of Australia,” he said.

He said Australia had 29 million cattle in Australia before the drought and at the end it was 24M.

“Now, two brilliant seasons after the end of the drought, we’ve just hit 26.

“Our analysis, supported by MLA, is that it is going take at least until the end of 2024 to get back to 28M head of cattle, let alone 29M, so we’ve got at least three years of good cattle prices in front of us and that brings more cash inflow into farming businesses,” he said.

“You know farmers don’t like paying tax, do they? They’ll find something to spend that money on…”

“We know that seasons will continue to be variable and volatile, we understand that.

But he said commodity price and demand fundamentals at the moment, supported “pretty sustained growth in the medium term.”

“I think at the point in time where it makes no sense, it will keep going a little bit longer.”

Mr Goonan said not everyone’s objectives or time horizons are the same, and this was playing out in the different ag sectors.