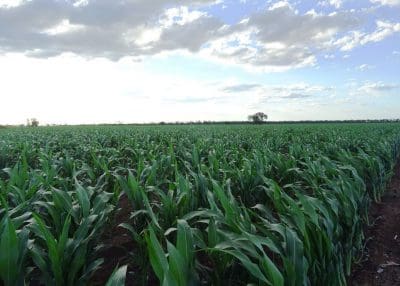 Solferino is located in the Kilcummin district, a reliable producer of sorghum, chickpea and wheat crops. Photo: Landmark Harcourts Emerald

CENTRAL Queensland property Solferino sold under the hammer on Friday for $18.9 million to local buyers Ben and Hayley Mulcahy.

The 7148-hectare holding is located in the Kilcummin district north of Clermont, and was offered for sale by the Nicholas family, who have owned the property since 1965.

Most of were from the wider Clermont district, with parties also from northern and southern Queensland.

“On the freehold area, it achieved $1116 per acre, which was above a lot of people’s expectations.

“It’s a tightly held area so it’s difficult to compare prices, but it was a very good result.”

Mr Beard said the Mulcahys have an existing property distance from Solferino, which they have purchased to increase their production capacity.

Solferino includes 2240ha of developed cultivation, and can carry 600-700 breeders or 1250 backgrounder cattle.

Its list of improvements is impressive, and includes 550 tonnes of silo storage, a liquid-fertiliser complex, steel cattle yards with a 500-head capacity, and a silage pit containing 1600 of Sugardrip forage sorghum, as well as two homes and a granny flat.

Solferino is described as a true mixed-farming block with excellent-quality arable soils, well-established buffel grass and a good supply of stock water.

Its cultivated area has been nearly doubled since 2013, and with 150 millimetres of rain in January, and further falls in recent weeks, the property is well placed to start planting its winter crop next month.

The property is in a prized area for growing chickpeas, wheat and sorghum, and is well located to take advantage of export opportunities out of the ports of Mackay  and Gladstone, and domestic consumers in Queensland.