Sandsprings is for sale via an expressions of interest campaign. Photo: Nutrien Harcourts

EXPANDING family farming operations and corporate investors with a presence in Western Australian agriculture already are heading up the list of interested parties in WA cropping operations on the market ahead of the spring selling season.

With WA’s border closed since April to those without exemptions to restrict the spread of COVID-19, listings are understandably gaining little interest from those without a footprint in the west, but the market has not softened as a result.

Nutrien Harcourts agent Yves Beagley has the listing for Sandsprings at Yandanooka in WA’s northern wheatbelt and said, even with borders closed, it and properties of a similarly calibre were attracting strong interest.

“There’s certainly more buyers than sellers in the market at the moment,” Mr Beagley said.

“We have some very good listings, but fewer for this stage of the season than we’d normally see.”

“We’re seeing very strong prices, and people who are thinking about getting out are weighing up the options on whether they continue farming, or take the prices on offer.”

In the Australian Farmland Report 2020 released in May, Rural Bank data showed WA had the highest median price growth rate of any Australian state in 2019 of 28.2 per cent, well above the national average of 13.5pc.

In the Planfarm Benchmark 2018-19 report, farms in the eastern, or low-rainfall, parts of the Geraldton port zone recorded the biggest return on capital of any WA cropping zones at 26.1-26.8 pc.

The exception was a 0.7pc drop in the Salmon Gums district north of Esperance.

Sandsprings is for sale by expressions of interest closing 2 October, and covers 3771 hectares, including an arable area of 3358ha.

It is being offered by vendors seeking opportunities outside agriculture.

“The district is experiencing a strong season, and the property is attracting strong interest.”

He said demand in the northern wheatbelt was coming from family and corporate parties.

“There are some strong family businesses well positioned for expansion, and they make up the majority of the interest coming forward.

“There is institutional interest in amongst that too, but some of that’s dried up because of the logistics issues with COVID.”

Mr Beagley said growers from as far afield as New South Wales had bought into the northern wheatbelt in the past year or two.

Mr Beagley said demand in the northern wheatbelt existed from growers looking to diversify from the bottom to the top half of the region’s low-to-medium rainfall zones, where average annual registrations totalled a minimum of around 250 millimetres and a maximum 400mm.

Proximity to the port of Geraldton was also a plus for much of the region, as was its generally mild winters.

“There’s less frost risk in the north than there is in other parts of the wheatbelt.”

Fit for the Hares

Darcy Hare and family are irrigation and dryland farmers at Wakool in the Murray Valley of south-west NSW.

Earlier this year, they bought Kiawa, a 2372ha property near Morawa to diversify their interests beyond their home property.

“We looked all around Australia apart from SA to get a bit more of an economy of scale, and we had a look at Planfarm’s benchmarking data.

“We saw people were still getting a 10pc return on capital in WA’s mid north.”

Mr Hare said Kiawa stacked up as an investment because of its 225-250mm of in-crop rain, average cereal yields of 1.5t/ha, and an attractive freight rate of around $17/t to get grain through the CBH network to Geraldton.

He said the district also offered hope of expansion.

Sandsprings sits between Mingenew and Three Springs, and is 142km south-east of Geraldton.

Its softer soil types — loamy sand, sandy loam, gravelly loam and small area of red loam — are a feature, and have allowed continuous cropping since the exclusion of livestock in 2007.

Sandsprings has a strong fertiliser and amelioration history.

Its cropping program focuses on canola, lupins and wheat, and crop now in the ground comprises 2717ha of wheat and 627ha of canola.

Also new to the market is Greyhome, a 2172ha aggregation at Cunderdin.

Greyhome sits 6km north of Cunderdin in is for sale by tender closing 6 October.

Its paddocks have also been well fertilised and ameliorated, and it has had more than 5300 tonnes of lime applied in the past decade.

Greyhome’s proven five-year average yields are 2.64 tonnes per hectare for barley and wheat, 1.5t/ha for lupins and 1.15t/ha for canola.

Mr Luers handled the listing of the 4882ha Innverness, the Pearce family’s holding at Wyalkatchem, north of Cunderdin.

Its three lots sold to separate local interests through a tender process at very strong prices. Greyhome at Cunderdin is for sale by tender. Photo: Nutrien Harcourts

The attractiveness of mixed farming is supporting values for properties in higher-rainfall zones of WA including Mt Sheridan, where the 11,503ha Connawarrie is for sale.

Connawarrie sits north of Newdegate and 130km from the south coast in the eastern Great Southern region.

It is for sale for $17.85 million through Elders Real Estate on behalf of vendors Ian and Lesla Chamberlain who are looking to retire. 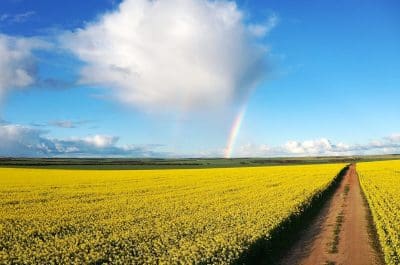 Connawarrie is for sale for $17.85 million. Photo: Elders Real Estate

Elders agent Simon Cheetham said WA’s border closure had helped to buoy interest from family operations in mixed farms in a market which has strengthened over the past three years.

“We’re seeing some high-quality farms come up, and agents are really busy.”

“The border closures have slowed down a few people looking to get over to WA, and family farmers are very active at the moment.

“It’s an area that’s had some corporate activity and there’s real potential, given value of the land and opportunity to aggregate.”

Connawarrie large-scale soil amelioration program started in 2001 and its cropping capabilities are supplemented by its livestock-friendly layout and improvements.

As part of its long-term rotation, Connawarrie’s 2020 cropping program includes lupins, oats, canola, wheat and barley which will be harvested by the vendors, who are hoping for an early 2021 settlement.