Centred eight kilometres north of the Menindee township, the property has most recently operated as a citrus, wine grape and livestock operation, and was previously a major producer of potatoes for TFI’s fresh-produce division.

Texas Downs has a 550-megalitre high-security irrigation entitlement from the Darling River which has been used to water 12.6ha of citrus and 12ha of winegrapes, with 80ha suitable for pivot irrigation.

CBRE’s Phil Schell and Angus Bills are agents for the sale by expressions of interest which close 13 June.

Mr Schell said Texas Downs could be expected to fetch around $2.5 million.

“The bulk of the value of the property could be in the water,” Mr Schell said.

Texas Downs was developed in the 1990s as part of the Tandou operation, which grows cotton at its Lake Tandou property south of Menindee, and horticultural crops.

Major tree-nut producer Webster bought much of the Tandou holding which had grown cotton, and sold the irrigation entitlement but retained the land.

It is now being used for sheep production. 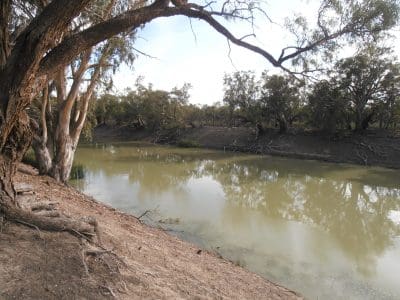 Mr Schell said Texas Downs’ new owner may decide to do something similar, or retain the water and grow pastures, fodder and cash crops.

“It’s good grazing for sheep and cattle, and it could be used for lot-feeding or cell-grazing.”

While the plight of the Lower Darling and its lack of water has dominated reports from the region in recent years, it remains a proven grazing district.

With an annual average rainfall of around 250 millimetres and good management, it can reliably grow native vegetation which can support sheep, cattle and goats.

Dorper sheep are said to be particularly well-suited to the region.

Improvements on the property include a modern packing shed covering 2730 square metres, multiple offices, a 500 sq m cool room, a workshop and two homes, as well as worker accommodation and farm shedding.

“Thomas Foods bought Texas Downs as early country for their potato production, and a new owner interested in horticulture might look to develop further area that can again spread the production risk.”

Texas Downs has historically produced many crops of citrus and Menindee grapes.

They have been a produce staple in Australia for decades, with the Costa Food Group once a major grower.

However, Costa sold its water entitlements and split up its land in 2016, and its blocks are now used for recreation or grazing.

Mr Schell said while Texas Downs still had horticultural plantings, production has been mothballed by TFI ahead of the sale.

“They were the last corporate to go into Menindee, and they are the last to leave,” one source said.

TFI moved into potato production with its 2013 purchase of Mondello Farms, north of Adelaide, and expanded east with purchases which included Texas Downs.

TFI was not available for comment  in relation to the listing of Texas Downs.

It is not believed to be selling any other assets in its produce or meat divisions.