Totalling 39,722 hectares, the portfolio is being offered via a two-stage expressions-of-interest (EOI) process.

Approximately 80 per cent of the total landholding is arable and has a history of producing wheat, canola and some barley.

All properties have been leased, mainly to local growers, with most contracts in place until 2024.

The holdings are non-continuous and vary in size from 771ha to 6568ha.

Acumentis sales director Ben Lamers, is handling the listing, and said the offering is a “significant parcel” of farms which are in a 290-kilometre stretch between Geraldton and Perth and 100-150km from the coast.

The farms are located within the districts of Yuna, Pindar, Tardun, Canna, Morawa, Perenjori, Bunjil, Latham and Goodlands.

He said SAFL purchased the operations almost nine years ago with the aim to improve the productivity of the sites and increase returns to themselves and their lessees. 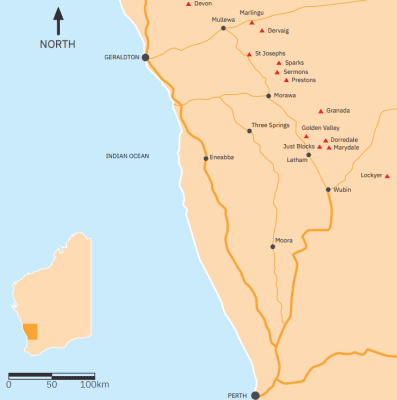 The operations are mostly within the Geraldton port zone. Photo: Acumentis

“The idea was to get good quality farmers to lease the properties, and getting a return off the land,” Mr Lamers said.

“When they purchased the land, the farms were probably not in the best state that they could be.

“Over the last eight or nine years, the farmers…have certainly contributed to making these properties a whole lot better than they used to be.

“The soils and farmland have been improved significantly.”

All properties are currently overseen by a farm manager.

“They are looking to crystallise a profit and move on in (a) different direction.”

He said the portfolio can be purchased as a whole or as individual parcels.

Due to the scale of the portfolio, Mr Lamers said it would be an ideal opportunity for an Australian or international corporate investor which owns similar investment types.

He said there has also been interest from companies, particularly those in the mining industry, which were interested in the carbon-farming potential of the portfolio.

“They would certainly be looking to work in conjunction with farmers to use the poorer land for carbon capture.

“There has certainly been a lot of interest from businesses looking at the land for that as well.”

The soil types on the properties range from red loams through to sandy duplex soils, and have an annual rainfall of 305-372 millimetres.

The operations also include various improvements, such as sheds, silos, water storages, and housing.

No price expectation has been identified for the portfolio; however, based on recent local sales it could make in excess of $1500-1600 per hectare.