THE United Kingdom remains the largest foreign owner of Australian agricultural land (2.6 per cent of agricultural land), followed by China (2.5pc) and the United States (0.7pc), according to the Foreign Investment Review Board (FIRB) 2016–17 Annual Report.

The report found Australian agricultural land recorded a slight reduction in foreign registration from 14.1pc to 13.6pc from the previous year. 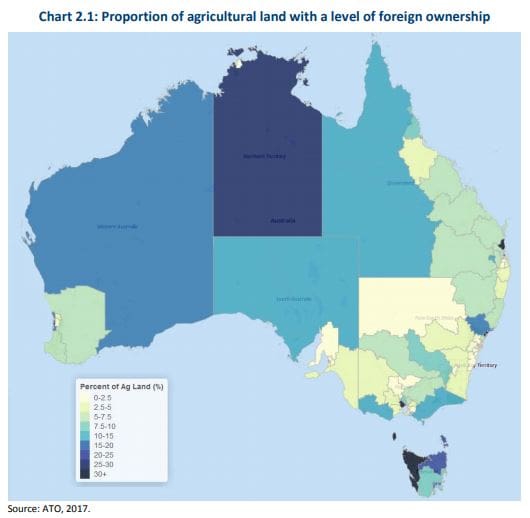 On 1 July 2017, the Government introduced a Water Entitlement Register to increase transparency around foreign ownership of water entitlements.

The Water Entitlement Register operates in much the same way as the existing Agricultural Land Register and is administered by the Australian Taxation Office (ATO).

Foreign persons are required to register their interests in registrable water entitlements and contractual water rights, and certain changes in those interests, regardless of value, with the ATO.

A stocktake period took place between 1 July 2017 and 30 November 2017 and the first report of registrations on the Water Entitlement Register is to be released in the second half of 2018.

The FIRB report showed Chinese investors were the largest source of foreign investment approvals in Australia overall by both value ($38.9 billion) and number (9714).

The US was the second largest source of approvals by value, with A$26.5 billion worth of approved applications.

In total, FIRB approved A$168 billion worth of business-related foreign investment proposals in 2016–17, 4pc below the previous year.

Major business-related investment focused on ports and electricity network assets, continuing the trend of acquisitions in these sectors in recent years. Data centres are an emerging area of interest for investors.

FIRB says the most significant factor explaining this drop was the introduction of application fees in December 2015, which resulted in investors only applying for properties they intended to purchase.

According to FIRB, other factors that may have contributed to the reduction include tighter Chinese capital controls, weaker market conditions and additional taxes imposed on foreign investor purchases in some Australian states.