THE IMPENDING sale of seven items of farm equipment housed on Currabubula Station is not related to the operations of associated company United World Enterprises (UWE), which remains solvent as a Sydney-based commodities trader. 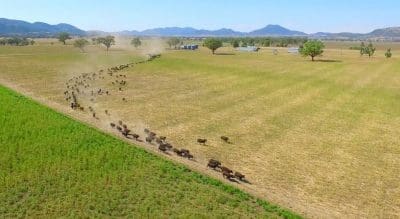 Currabubula Station is located near Tamworth in northwest NSW.

Founded in 1993 by Freda Feng and her husband Jimmy Liu, UWE is an active trader of Australian beef, cottonseed and grains, and also owns Currabubula Station near Tamworth in north-west New South Wales.

Market speculation about the future of UWE has arisen from reports in the grain trade that UWE itself is in liquidation.

According to an Australian Securities and Investment Commission document dated 2 July, the mortgaged items which are now in controller’s hands are:

Insolvency accountants Rodgers Reidy director Andrew Barnden told Grain Central today that while the future ownership of Currabubula Station was unclear at this stage, UWE was still in business.

“United World Enterprises is not in liquidation or administration or receivership,” he said.

Mr Barnden was appointed by a financial institution to assume control of the farm equipment which was part of the walk-in-walk-out sale of Currabubula Station.

The property listed last year, and was passed in at auction on 28 May.

Mr Barnden said a price for the property was negotiated after auction, and while contracts have been exchanged, the deal has not settled, and he is now investigating the agreed price on behalf of creditors.

“Subject to the results of my inquiry, there could be a fresh sales campaign.”

“If it turns out this sale price is fair-market value and all parties agree, it may honour the contract.”

It is recognised as a premium beef-producing property.

Ms Feng said UWE’s trading position was not in jeopardy.

“The wrong information is out there. A customer rang me today and told me,” Ms Feng said.

“It has hurt UWE’s reputation we have build up over 27 years.”

“It’s a big wave coming towards me.”