Wallowa Downs is for sale via an expressions of interest campaign. Photo: Nutrien Harcourts

VALUES for well-developed irrigated and dryland mixed farming in Victoria’s West Wimmera are set to be tested with the sale of Wallowa Downs.

The Jamiesons, who run the Wattle Park White Suffolk stud at their home property, have set up Wallowa Downs as a purely commercial sheep operation growing lucerne, dual-purpose and cash crops.

“It’s all set up to run big mobs of ewes now, and if you lamb in March-April, you can be turning off early suckers in August-September, and heavier weights later on.”

The property is currently carrying roughly 4000 merino ewes, and has 420ha of lucerne, including 300ha under the property’s six equipped centre pivots.

Under a licence for 2000 megalitres, these draw water via four equipped bore, and a further seven centre-pivots are ready for future development.

All up, the equipped centre pivots irrigate 650ha.

Average annual rainfall in the district exceeds 400 millimetres, and Mr Jamieson said the kind season to date meant there was little difference between irrigated and dryland lucerne.

In addition to lucerne, crops in the ground this year are 590ha of wheat, 1460ha of barley and 60ha of rye. 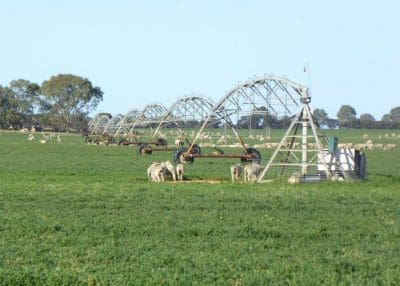 The property is around 80km from the JBS meatworks at Bordertown in South Australia, and the vendor believes additional development would allow the property to augment its carrying capacity considerably.

Nutrien Harcourts Keith is handling the sale, and agent Geoff Watts said Wallowa Downs was attracting strong interest from locals, high net-worth investors and primary producers from outside the district.

“There’s upside for further development of lucerne pastures and grain storage, and we’re getting a lot of good inspections on it already.”

“The owners have redone the irrigation infrastructure and fencing, and the pastures have been performing very well for them.”

The property adjoins AJ & PA McBride’s Telopea Downs, which was bought in 2018 from the Qatari-owned Hassad as it wound up operations in Australia.

Its soils are grey sandy loams, some improved with the incorporation of clay to boost moisture-holding ability.

It is for sale by expressions of interest closing 4 November.