SOURCES report Warakirri’s cropping arm has bought Glencore’s aggregation of non-contiguous properties covering around 12,500 hectares on the southwest slopes of NSW for more than $40 million in a private sale. 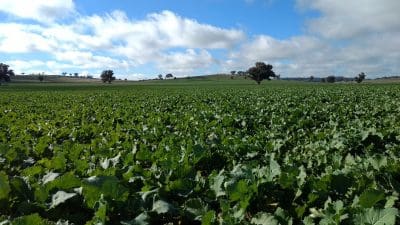 Operating under previous owners as Glencore Land (Australia) Pty Ltd and headquartered at Quandialla, locals said the country was accumulated between 2007 and 2012 in farming districts between Grenfell, Temora, West Wyalong, and Young.

The transaction reflects a value of around $3300 per hectare, which is in line with recent sales for this reliable winter-cropping country where annual average rainfall of 450-550 millimetres allows production of canola, milling wheat, barley, and pulses.

The country averages roughly three tonnes/ha of APW or Hard-type wheat, with the potential to go to 5-6t/ha in bumper years.

Sources in the district said expressions of interest on the 32 blocks which made up the aggregation were invited in the latter months of 2017, and attracted responses from some local growers prior to Warakirri’s purchase of all the properties.

Warakirri was established in the 1990s as an institutional investor, and this most recent purchase has lifted the area of broadacre cropping land it owns and operates in Victoria, NSW, southern Queensland and Western Australia to more than 90,000ha in total.

In a statement provided to Grain Central, Glencore Agriculture said it could confirm a contract was in place to sell its cropping land on the NSW southwest slopes.

The company has also confirmed it remains “fully committed” to its core businesses of storage and handling as well as marketing.

In a statement given to Grain Central on 12 February, Daybreak Cropping has been named as the purchaser of Glencore Agriculture’s NSW aggregation.

Daybreak Cropping is a national broadacre cropping business, and a partnership between Warakirri Asset Management and the Public Sector Pension Investment Board, or PSP Investments, one of Canada’s largest pension investment managers.

Warakirri is the investment and property manager for Daybreak Cropping.