DISTRICT farmers have snapped up 1483 hectares of South Australian cropping country at Pine Point, with five of the six Webb properties blocks selling at auction for a total of $13.35 million, and the remaining block selling on the day for an undisclosed amount.

The Mattschoss family is the new owner of the bulk of the aggregation, and bought two lots totalling 275ha for $3.53m and averaging $12,836/ha, as well as the 204ha Lot 1 for which the price has not been disclosed.

“The Heans were previous owners of the block, and sold it in the 1980s, so it’s back in the family now,” Landmark Harcourts Minlaton agent, Wayne Hickman, said.

Located on the east coast of the Yorke Peninsula, absentee owners and holders of the original property for more than 100 years, the Webb family, has leased out the blocks for many years .

“The Webb land was the largest offering in terms of area of quality cropping land in the past 20 years.

“The vendor, Mrs Webb, was extremely happy, and the buyers paid less for this country than what they would have if they bought another 8 or 9 kilometres inland.” 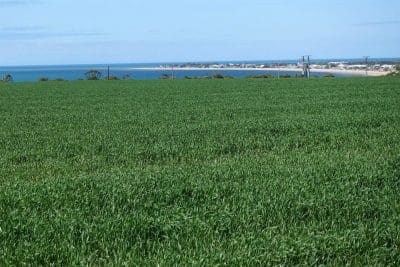 Mr Hickman said average yields on the Webb properties were around two tonnes per hectare for lentils, and 5t/ha for wheat.

Annual average rainfall for the properties is 375 millimetres, and its flat to gently undulating red/brown loams and lighter grey sandy loams are suited to other crops including barley and canola, as well as livestock production.

Average price for the 1418 arable hectares was around $11,350/ha, which Mr Hickman said was a new high for coastal properties in the district.

“Go in from the coast to an area like Maitland, and people are paying a lot more than that.”

Holders of leases currently in place on the Webb properties will harvest their winter crop prior to the change of ownership, and are said to have farmed under district best practices, with excellent fertiliser and spray regimes.

“Now the Webb properties have been sold, it will limit what comes up in the district, because the Yorke Peninsula has been tightly held.”

Improvements include one dwelling, various sheds and sheep yards, and an independent water supply on each block, and the properties are located 18km south of Ardrossan’s grain terminal, and 45km north of Port Giles.

Mr Hickman and colleague Troy Goldsworthy conducted the sale, with 130 people in attendance at the October 26 auction at Curramulka Community Club.